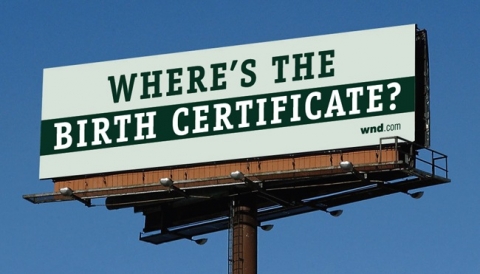 Some members of the Tea Party still insist on seeing a copy of President Obama's REAL birth certificate. You know, that one from Kenya.

We all seem to have a habit of making ‘New Year’s Resolutions,’ focusing on what we hope we will be able to do during the year. Last year, I suggested a few for Oklahoma Democrats. They pretty much ignored me. Since it looks like the main problem we have in Congress, and in state legislatures, is the Tea Party folks, I thought I’d go for a higher target, and offer them some resolutions. So here goes.

Resolve to forget that President Obama is black and has a funny name. It would be hard to ignore the fact that many of you hate him because you can’t stand the thought that there is a black man in the White House. I’d suggest you look over your shoulders, guys (because most of you are old, white guys). Pretty soon, you are going to be a minority, and having a black or brown or female President isn’t going to be that strange. If you keep up the racist comments, you’d better hope that the next few Presidents either have a short memory, or believe we should ‘love our enemies.’

Speaking of minorities, resolve to get over the fact that there are 12 million undocumented immigrants living and working in our country. You need to figure out a way to turn them into legal, tax-paying citizens. Oops. They’d be voting too, wouldn’t they? Maybe that is why (in addition to racism), that you don’t want them to become citizens. They might fire you. We need people who are willing to work in the hot sun putting on a roof, spreading concrete, hauling garbage, harvesting our crops, working in our food factories, and generally making our economy work.

And considering menial jobs, you seem to have total disdain for the people who do our society’s heavy lifting. Doesn’t matter whether they are immigrants or citizens. I used to load bags, flush the lavatories on airplanes, and service the food that used to be served on flights. It was hard work. If you don’t have people willing to do this kind of hard work, our society would cease to run smoothly. So you should resolve to stop picking on workers; they have as much right to medical care, job protections, retirement, vacations, and on the job safety as you do. Sometimes they form unions to get or maintain those benefits. Oh yeah, I forgot. Unions usually are pretty successful at turning out a Democratic vote.

While we are considering people whose jobs are important, how about resolving to stop beating up public employees, particularly teachers. Teachers have about the most important, and most difficult job in our country – educating your kids. You aren’t making it any easier when you cut their pay and retirement, load them up with student loans, provide them no resources or respect, and then criticize them when the tests you insist be given continuously show that your kids are not thriving in school. But maybe you don’t want them to thrive. They might grow up and become educated voters. Wouldn’t want that, would we?

Resolve to stop your war on women. I get it. You don’t like abortion. But the best way to get rid of abortion is to make it unnecessary, not to ban it. Give the kids sex ed in the schools, make contraceptives available, and reduce unwanted pregnancies. Fewer unwanted pregnancies, fewer abortions. And you might consider taking care of the kids that you insist be born. Right now, it seems that once a baby has uttered its first cry, you forget about them. The women you want to control? They vote.

I’ve saved the best for last. You’ve probably noted that voting seems to be an integral part of many of the resolutions I’ve suggested for you. It’s pretty clear that you don’t want anyone but angry, old, white people who get all their news from Fox, turning out to vote. So you have been working very hard to suppress voting by anyone that doesn’t agree with you. And you are being dishonest about why, for the most part. You say it’s to prevent fraud, because all voters should be able to identify themselves. But you make no provision for voters to get the ID you require. Black people, urban dwellers, students all are people who may not have that ID. OMG. They mostly vote Democratic, don’t they? OK, I get it now. You aren’t worried about fraud, you’re worried about Democrats.

So my final suggestion for you is, resolve to let everyone who is eligible to vote, vote. It’s the foundation of the democracy that you say you love. Prove it.