Romney says he's not running in 2020, but he will "see what the alternatives are" before endorsing 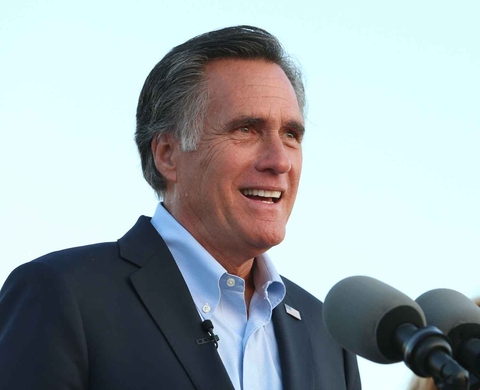 Sen.-elect Mitt Romney said Wednesday that while he would not run in the 2020 presidential race, he was not yet sure who he would endorse.

"I'm going to see what the alternatives are," Romney told CNN's Jake Tapper. "But I pointed out, there are places where we agree on a whole series of policy fronts. But there are places that I think the president can, if you will, elevate his game and do a better job to help bring us together as a nation."

On Tuesday, The Washington Post published an op-ed written by Romney, where he said the Trump presidency "made a deep descent in December" -- referencing the several high-profile departures from the administration, including Defense Secretary Mattis and White House chief of staff John Kelly.

In his interview on CNN's "The Lead with Jake Tapper," Romney said the departure of Mattis, as well as President Donald Trump's "abrupt" move to exit Syria were "precipitating" events in deciding to pen a scathing op-ed earlier this week slamming Trump's character.

"I think it's important, as I begin this new job, to make it very clear where I stand," Romney said. "And I also note that the departure of Secretary Mattis and the decision to pull out of Syria and the abrupt way it was done was a precipitating event for my finally going on this record."

Romney also noted that there were several times he split with the current administration's handling of situations.

"Well, over the course of the last two years, I have put out a number of statements that relate to things that were of great concern to me. The Charlottesville response by the President was something that gave me great concern. The support for Roy Moore in the senate race was something I was very, very concerned about. His attack on the media," Romney told Tapper.

Although Romney notes in his op-ed there are areas that he agrees with the Trump administration's policies, like appointing conservative judges and remove "excessive regulations," the New Year's Day piece was also a detailed critique of Trump's character.

"A president should demonstrate the essential qualities of honesty and integrity, and elevate the national discourse with comity and mutual respect," Romney wrote.

"As a nation, we have been blessed with presidents who have called on the greatness of the American spirit. With the nation so divided, resentful and angry, presidential leadership in qualities of character is indispensable. And it is in this province where the incumbent's shortfall has been most glaring."

Romney, although an incoming senator for Utah, also served as governor of Massachusetts and was the 2012 Republican nominee for president. He will be sworn in as a new member of Congress on Thursday, a role that Trump endorsed him for during the midterm election.

When asked by Tapper if he regretted accepting Trump's endorsement, Romney said, "He was endorsing me, I wasn't endorsing him."

Romney, who was also floated as a potential choice to serve as secretary of state when Trump was initially building his administration, said he didn't think Trump "followed through" on his promise to act more presidential after the election.

"Well, you know, after he was elected president, it was very much my hope that he would rise to the occasion, rise to the mantle of the office," Romney said. "After all, becoming President of the United States is quite an elevation for anybody. And he has said during the campaign that he could be extraordinary presidential."

Trump responded to Romney's op-ed on Twitter Wednesday morning, calling on Romney to be united with the party and focus on border security.

"Here we go with Mitt Romney, but so fast! Question will be, is he a Flake? I hope not. Would much prefer that Mitt focus on Border Security and so many other things where he can be helpful. I won big, and he didn't. He should be happy for all Republicans. Be a TEAM player & WIN!" Trump tweeted on Wednesday, also referencing outgoing Republican Sen. Jeff Flake from Arizona, who became a notable Trump critic during his final term.

He reiterated his message for Romney during a cabinet meeting on Wednesday, saying that he wished Romney could "be more of a team player."

Trump firing back against Romney was met with support from Republican National Committee Chairwoman Ronna McDaniel, who is also Romney's niece.

"POTUS is attacked and obstructed by the MSM media and Democrats 24/7. For an incoming Republican freshman senator to attack @realdonaldtrump as their first act feeds into what the Democrats and media want and is disappointing and unproductive," McDaniel tweeted in support of Trump on Wednesday.