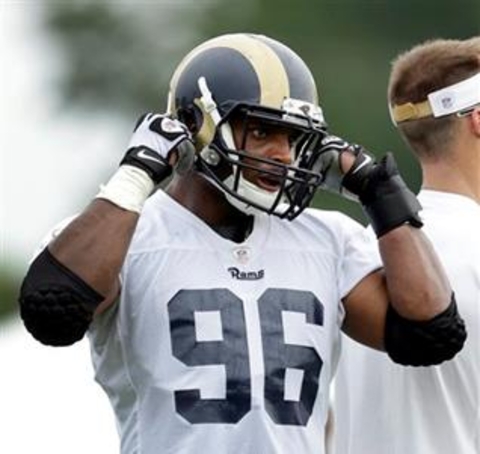 Such guidance could be valuable for the St. Louis Rams, even if by all accounts they have welcomed Michael Sam into the fold.

"I don't think it ever hurts to just talk about general respect for other people and other players," middle linebacker James Laurinaitis said. "There's not a problem in our locker room, however it doesn't hurt to go around and remind people about it."

The worst hazing Rams rookies face is toting veteran players' helmets off the practice field. Coach Jeff Fisher says no one is made to sing at dinner time.

"Yeah, we have a philosophy about that," Fisher said. "The rookies are here to help us win and if you treat a rookie like a rookie he's going to inevitably do something stupid and act like a rookie."

As far as Sam goes, there has been no visible dissent in camp whatsoever regarding the NFL's first openly gay player.

Nowadays, players asked how Sam is fitting in might answer with a question themselves: Why is this still a big deal? They are liable to respond with a shrug when asked what it's like having an openly gay teammate in the locker room, or whether it's an issue having Sam showering next to them.

Move on already, they say.

"The NFL is a huge melting pot, people from different walks of life, backgrounds, family backgrounds, socio-economic backgrounds, ethnicities, all that stuff," defensive end Chris Long said. "So people are used to playing with people who are not the same as them in any way."

The bottom line is it's "pretty easy" for players to adjust, Long said.

The team has treated Sam just like most of their players, despite the extra attention. It removed the backdrop that had been in place for Fisher for a six-minute post-practice scrum interview with Sam on Tuesday, a message that it wasn't that big of a deal.

Yet, the NFL Network had a camera and boom mike trailing Sam strolling to the locker room.

The Rams plan to limit availabilities the rest of camp for a player who after all is a seventh-round pick.

Sam appeared confident, even cocky about his chances, saying he thought questions about his sexual orientation would cease "when I lay somebody out that first game." He was brash enough to deconstruct a few questions and wait to have them rephrased, but also joked some, too, saying he lost 13 pounds preparing for special teams duty "because I want to run fast, don't you?"

This will be the second round of sensitivity training for the Rams. The head of an advocacy group for gay and lesbian athletes spent a day at Rams Park soon after the draft, meeting with everyone in the building.

Like it or not, round two is coming. And then, players hope, it's on to the competition.

"Everybody should stop and think about it because it's a big moment to have courage to do what he did, and be who he is and be openly who he is," Long said. "It gives cause for reflection.

"But at the same time he's a football player, it's about football, and he knows that."

Sam came out as gay before his senior year at Missouri and judging by the results, it was no distraction at all. The Tigers made a seven-win improvement and tied the school record with 12 wins. Sam was co-SEC defensive player of the year.

"If you look at our season, it didn't hurt us at all," said cornerback E.J. Gaines, a fellow rookie and former Missouri teammate. "If anything, it brought us closer."

It was impressive that everyone kept Sam's announcement to themselves.

Rams rookies had to sing for their supper in 2009 when Laurinaitis was a second-rounder out of Ohio State, and though he found the prospect embarrassing, he ended up having fun. He volunteered on the first day to get that chore out of the way, and picked a popular song, "Nobody" by Keith Sweat, with the title used continually as a one-word chorus so teammates could easily join in and "you could cut it short."

Nowadays, all the veterans ask is that youngsters are eager to learn, not full of themselves from college stardom and not daydreaming when they're on the sideline.