Same-sex relationships are taboo in China. An Alibaba ad is challenging that 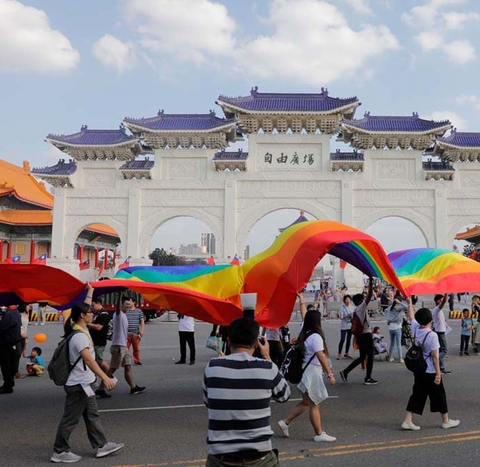 A new commercial for one of China's largest online marketplaces never utters the words "gay rights." But it's making waves online for what appears to be a subtle challenge to one of the country's major taboos.

The 23-second ad released by Tmall, an e-commerce platform owned by Alibaba, begins when a young man brings another man home for the holidays and introduces him as "Kelvin." Two girls in the home respond by giggling and gossiping. At dinner, the father hands Kelvin a bowl of soup, and he responds by saying, "Thanks, Dad," creating an awkward moment of surprise.

The video caught fire this week when it was posted on the Chinese social media website Weibo by LoveMatters, an organization that provides education and advice about sex and relationships.

LoveMatters praised Tmall as a "prominent company" that supports the LGBTQ movement — something it said was "important for the community to be visible, to be seen by the public, and to be recognized."

The video has millions of views and has been liked on Weibo tens of thousands of times. It has also garnered more than 4,500 comments, many of which are positive.

"Tmall is taking a smart stance by avoiding saying directly that it's supportive [of gay couples] or not," wrote one user, whose name translates to an ancient Chinese phrase meaning "free spirited." "But it's already a great step forward."

In a statement to CNN Business, Alibaba did not acknowledge the ad's gay subtext, intended or otherwise. "Chinese New Year is a time for family reunion and inclusion, and the ad is a creative expression to celebrate such an occasion," the company said.

The ad isn't an unprecedented one for Alibaba, said Duncan Clark, chairman of the investment advisory firm BDA China and author of "Alibaba: The House That Jack Ma Built."

In early 2015, for example, Alibaba's Taobao, another e-commerce subsidiary, sponsored an online contest with the gay dating app Blued to send couples from China to California to get married.

"As long as you have true love, Taobao will help you realize the dream," read a contest tagline.

In June of that year, Tmall posted an image of a rainbow-colored version of its black cat mascot on Weibo with the caption, "Love will be enough."

"It's smart to reach out to as many customer segments as possible," Clark said. He added that a message of "inclusivity" is appealing with younger generations.

Homosexuality is not illegal in China and, in 2001, the authorities removed it from an official list of mental disorders. But experts and activists say LGBTQ people in China still face persistent discrimination and prejudices from the government and public.

Since 2016, Chinese censors have banned portrayals of what they see as "abnormal sexual behaviors," including gay relationships, in TV and online shows.

Even so, things are changing, however slowly. The National People's Congress — the country's rubber-stamp parliament — publicly acknowledged proposals to legalize same-sex marriage last month. While that doesn't bring the country anywhere close to legalization, it does show that the government is willing to recognize the topic.

At the same time, several local governments and media sites have started polling the public online about whether to legalize same-sex marriage. One poll initiated by Phoenix New Media registered five million votes in support — more than 60% of the total votes cast.

By Laura He and Steven Jiang, CNN Business via The-CNN-Wire™ & © 2020 Cable News Network, Inc., a WarnerMedia Company. All rights reserved.