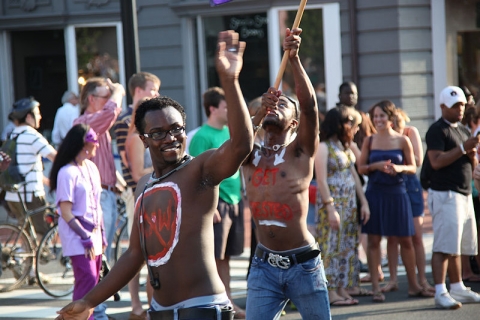 According to the CDC (Centers for Disease Control and Prevention), one in two black gay men in the U.S. will be diagnosed with HIV in their lifetime! It made me sad and infuriated! Compare that to 1 in 11 white gay/bisexuals who will contract the disease.

Let that sink in- that is half. Half of our beautiful strong black gay/bisexual men will have to hear the words, “You have HIV.” That is scary and should scare you too.

Most HIV infections are caused by sharing dirty needles and sexual contact. So that means behaviors that are totally preventable. Black gay/bisexual men - your future is literally in your hands. You must care enough about yourself and each other to prevent this mess. You have to love yourself more than the person you sleep with.

You have to get tested twice a year or more. The tests are quick and easily accessible these days. There are numerous free testing locations in Oklahoma City. Most of these agencies use the oral method and results come in less than 20 minutes. You need to have these conversations with all of your black gay/bisexual friends no matter how uncomfortable.

Believe me, you will be more uncomfortable having to say or hear the words “I have HIV.” Imagine telling your parents or family that you are infected? You are the hope and dream of their family. They depend on you. They need you to be healthy and thrive.

Black men are already an endangered population – at current rates, one in three black men will spend time in prison. Higher rates of incarceration, higher rates of sentencing, a higher rate of returning to prison, the prevalence of police brutality and being more likely to not be given an interview for a job contributes to the endangerment.

Take getting infected with HIV off the list of perils against you. If you do not wear condoms, start. You cannot be totally sure whether your partner is sleeping around. But if you are in a monogamous relationship get tested together as a reassurance. I have heard so many cheating stories so you can never be too safe.

You have to make yourself a top priority and know that your black gay life matters! If it does not matter to you, it will not matter to anyone else. As African-Americans, we take pride in our fashion, our swag, our bold voices, but we do not take pride in staying healthy as much as we should.

Within in our community, there are so many stereotypes about being gay. One of them is that all gays have HIV/AIDS. Be an example to those in your community. Do not be afraid to let people know that you, as a black man who sleeps with other men, are proud to say that you are HIV free!