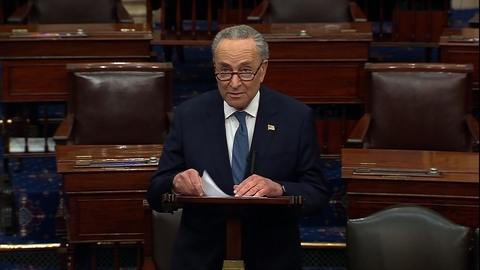 Senate Minority Leader Chuck Schumer is looking to block President Donald Trump's name from appearing on federal stimulus checks in the future, money provided as financial relief from the economic effects of the coronavirus pandemic.

The New York Democrat's effort to push such legislation tees up another confrontation with the White House over how best to handle the federal response to the outbreak, this time concerning the administration's last-minute decision to feature the President's name on the checks.

"President Trump unfortunately appears to see the pandemic as just another opportunity to promote his own political interests," Schumer said in a statement Monday.

"The No PR Act puts an end to the president's exploitation of taxpayer money for promotional material that only benefits his re-election campaign," he added. "Delaying the release of stimulus checks so his signature could be added is a waste of time and money."

Schumer's office says that the Senate minority leader would like to include legislation preventing names, likeness or signature of Trump from being included in the next round of Covid-19 response aid. Politico first reported on Schumer's plans to introduce the act.

The saga over Trump's name on the checks has become another layer of controversy surrounding the federal response, which has faced accusations of politicizing the crisis.

Earlier this month, a senior administration official confirmed to CNN that Trump's name, in a last-minute Treasury Department order, would appear on checks sent to millions of Americans.

Two senior Treasury officials told The Washington Post, which first reported the decision, that the move would probably set back the delivery date on the first set of paper checks -- potentially slowing a process that could already take up to 20 weeks.

The Internal Revenue Service, however, insisted that the move will not result in a delay. Treasury Secretary Steve Mnuchin later said that it was his idea, not the President's, to include Trump's name.

When asked about his name appearing on the checks during a briefing earlier this month, Trump said, "Well, I don't know much about it, but I understand my name is there. I don't know where they're going, how they're going."

"I'm sure people will be very happy to get a big, fat, beautiful check and my name is on it," the President said, adding that "it's not delaying anything."

Schumer also called on Monday for called for public Senate hearings into testing shortages and implementation of stimulus law, urging Senate Majority Leader Mitch McConnell to "instruct his Committee Chairs to immediately begin vigorous and desperately needed oversight of the Trump administration's response to the COVID-19 pandemic and its implementation of the CARES Act."

Schumer urged Trump to name a new point person for management of the Defense Production Act and disparaged Trump's pick of White House trade adviser Peter Navarro as the act's policy coordinator for the federal government.

The White House in turn released a letter from Trump attacking Schumer in starkly personal terms -- just moments after the President said that "this is not the time for politics."