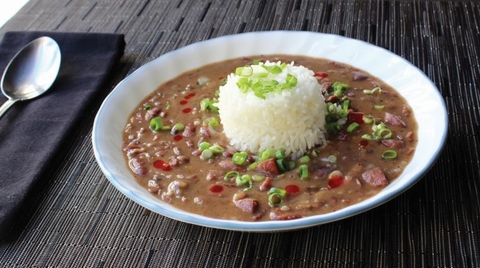 Happy February my little foodies! Besides being the season of L-O-V-E (and apparently National Condom Month…so many things running through my mind right now), it is also Carnival season and my favorite, Mardi Gras!

With all the great foods that come out of New Orleans and the Cajun/Creole culture, one of my most favorites, and most familiar to people when thinking about Mardi Gras, is a good ole’ bowl of Red Beans and Rice!

For me, the food of Creole country is a cuisine layered in flavors. With the many diverse races and cultures that make up Louisiana from Native American, to French, and Spanish and the African influences passed on from slaves, the food of Louisiana is wonderfully simple and packed with taste passed down for generations.

Now, not having one lick of Creole, Cajun or Acadian heritage in this “Daddy AF” body of mine, but being someone who appreciates the cuisine of Mardi Gras, I give you my take on this Louisiana favorite.

2 ribs of celery diced (about a half cup)

1 pound dried red beans, rinsed and picked through of debris

1 pound smoked sausage (I use Andouille)

1 tablespoon bacon fat or as needed (here’s a chance to drag that coffee tin of bacon grease out of the fridge. You may substitute cooking oil)

1. In a large heavy bottom pot or Dutch oven, begin melting the bacon fat or heating the cooking oil. Add the Holy Trinity (onion, celery and bell pepper) along with the smashed and minced garlic; cook slowly until the onion mixture is bright and fragrant. Sprinkle in the 2 tablespoons of Little Bit More spice or your choice of Creole seasoning to taste and cook with the onion mixture until the vegetables are slightly tender.

2. Add the rinsed and drained red beans along with the two quarts of water to the onion mixture and bring to a boil. Add in the smoked ham hock, smoked sausage, bay leaf and dried sage. Bring the beans back to a boil then turn down to a low simmer. Cover the pot and allow the beans to cook until tender…around five hours. Keep an eye on the water level and do not allow the beans to cook dry or to scratch on the bottom. Add water if needed.

3. When the beans are cooked, remove the ham hock and discard the bay leaves. Add in the Tabasco Sauce and mix in. Taste for seasoning.

4. Serve the beans with a healthy scoop of cooked rice, and top it all off with sliced scallions.