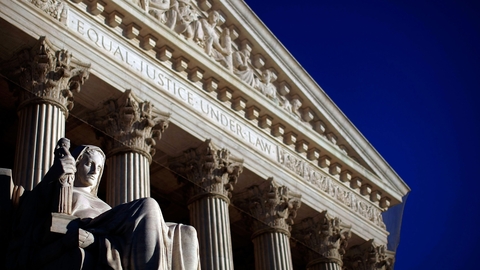 The Supreme Court on Monday sent back a case pitting religious liberty against LGBTQ+ rights to the lower courts for further consideration in light of last term's ruling in favor of a Colorado baker who refused to make a cake for a same-sex couple.

The court's decision puts off a major case for next term and allows the issue to further percolate in the courts below.

The court took over three months, discussing the case behind closed doors, to render Monday's summary decision. The timing suggests the justices were debating different ways of resolving the case, short of putting it on the calendar for next term.

It was a summary order of two sentences with no noted dissents.

"Today's move to send the case back to the Oregon state courts is something of a surprise, because this case had been pitched all along as raising the broader constitutional question that the Justices ducked last year in the Masterpiece Cakeshop case," said Steve Vladeck, CNN Supreme Court analyst and professor at the University of Texas School of Law.

"By asking the state courts to reconsider their ruling in light of Masterpiece Cakeshop, the Justices are, in effect, asking the Oregon courts if a similarly narrow basis is available for resolving this case -- even though the parties have framed the case as presenting a broader conflict between the constitutional rights to religious liberty and same-sex marriage."

Vladeck added: "That it took the court this long to reach a result that, in retrospect, is a pretty straightforward compromise, suggests that there was detailed back-and-forth behind the scenes."

"It's not hard to imagine some justices wanting to take this case now, others wanting to deny it altogether, and today's result emerging only over time as a middle ground that they could all endorse -- at least publicly. And it's hard to imagine that Chief Justice Roberts wasn't at the heart of such a compromise," he said.