Seeing your world - and your love - on screen matters 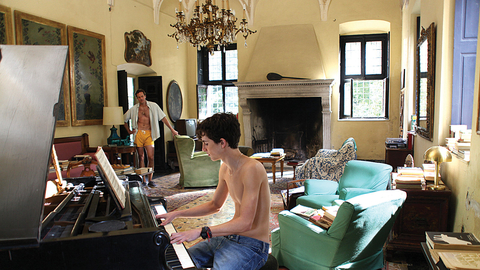 (CNN) -- "Black Panther" has been embraced, debated and viewed by millions in a fashion that can only be described as a cultural and political phenomenon. On its way to becoming one of the biggest and most financially profitable movies of all time, the film has also sparked vibrant debates over issues as wide-ranging as race, slavery, empire, colonialism, feminism, violence and the search for home.

The film has unquestionably put at the center of conversation groups that traditionally have fought their way from Hollywood's margins. Yet it has also been criticized for its absence of any overtly identified LGBTQ characters, an absence that should be rectified in subsequent sequels.

It's right for critics and audiences to debate different forms of inclusion in "Black Panther," but what this debate risks obscuring is the common bond -- despite its absence of gay, lesbian, transgender or nonconforming characters -- that "Black Panther" shares with the Oscar-nominated "Call Me By Your Name," a movie that depicts a heartbreaking love story between two gay men, set in Italy during the summer of 1983.

At the heart of both films is a love story. "Black Panther's" love affair concerns an entire people, spanning several continents, proudly wearing its Du Boisian "double-consciousness" as a badge of filial courage. It's as familiar to the initiated as the black nationalist colors of red, black, and green that punctuate one of the film's best scenes.

Both these films powerfully challenge traditional norms because they treat their main characters as three-dimensional human beings rather than how black or gay characters are usually portrayed: tragic figures doomed to violence, death and failure. In "Call Me By Your Name," Armie Hammer's Oliver and Timothee Chalamet's Elio play out their love story without the clichés other gay characters endure: They are not harassed by violent homophobes, ridiculed by friends, disowned by parents, or stalked by the shadow of AIDS. Indeed, "Call Me by Your Name's" most revolutionary aspect is its circumspect withholding of punishment for gay love, a trope that haunts most cinematic portrayals.

Michael Stuhlbarg's performance as Elio's understanding father, shamelessly ignored by the academy though richly deserving of a best supporting actor nod, adds rich layers to the film by imagining a (seemingly) heterosexual father who is not only unashamed of his 17-year-old son's sexuality, but also actually embraces his identity. In doing so, his character instantly became a hero to some of pop culture's biggest icons and reinforced (at least for gay white males, to be honest) a new standard of empathy.

"Black Panther" offers even more transgressive representations of blackness than "Call Me By Your Name" (which features two white male protagonists) does for representations of queer culture. The movie is populated with black characters who have emotional depth.

Chadwick Boseman's T'Challa, Lupita Nyong'o's Nakia, and Letitia Wright's Shuri introduce us to their everyday lives in the fictional African kingdom of Wakanda. The movie deftly places African excellence, intelligence, technological sophistication and beauty as part of a larger, heretofore unacknowledged, context. One of "Black Panther's" most revolutionary aspects is that it takes black genius -- and political equality between men and women -- for granted.

Wakanda's people radiate a self-confidence that simultaneously upends mainstream audience expectations and satisfies the freedom dreams of black peoples scattered across the African diaspora who recognize -- many for the first time -- characters on screen that resemble the private worlds they have always inhabited.

"Black Panther" and "Call Me By Your Name" both stretch the boundaries of cinematic imagination. They resist straitjackets that police boundaries of love, masculinity and femininity within black and gay communities. "Panther" does this by avoiding examining Wakanda through a white gaze, referring to a white CIA agent as a "colonizer." Ryan Coogler's obvious affection for black people from Oakland to Africa shines through in his sensitive portrayals of urban America in flashbacks and his magisterial depiction of Wakanda. The film confronts black vulnerability in the face of personal and political loss and embraces black genius on a visceral level. He treats black people in Africa and America as complex human beings rather than as stereotypes.

"Call Me By Your Name" strips its world of a normative heterosexual gaze and in the process affirms the humanity of its story. Homosexual love in the film is a source of joy instead of shame. Most strikingly, it brings a father and son closer by film's end than they were in the beginning.

Neither film perfectly depicts the breadth and depth of corners of the world they each brilliantly evoke. "Call Me By Your Name" opens up new ground in its portrait of gay men against the backdrop of an overwhelmingly white world. "Black Panther" seems hesitant to explore black sexuality (save a chaste kiss between two major characters toward the film's conclusion) or sexual orientation and at times, through the character of Michael B. Jordan's antagonist Eric Killmonger, hews disappointingly close to stereotypes of black male rage.

Ultimately, however, the attempts hit their mark. The common denominator between the world's first blockbuster film about an African superhero and an art house film built around a gay romantic love story resides in their near-transcendence of stubborn clichés that obscure the rich inner lives of blacks and gays. Their creative ambitions complement each other, placing the experiences of marginalized groups as central to appreciating the panoramic nature of our collective human family.