Senator McConnell: You're on notice 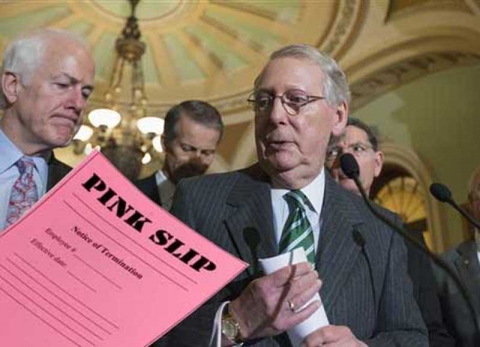 " I expect you to do your job and show leadership to others in the Senate." Gayly file photo.

I am writing you with regard to your press release on Supreme Court Justice Scalia and your opinion as to his replacement. You state that the American people should have a voice in the selection of their next Supreme Court Justice and so the vacancy should not be filled until we have a new President.

I, for one, have not forgotten the government shutdown of 2013. Perhaps this has made me sensitive to United States Congressmen who go on record stating they will not work with President Obama. That is exactly my impression when reading your press release. It is the President’s job to nominate Supreme Court Justices and it is the Senators’ job to confirm or deny the nomination. Just as my employer expects me to do my job, I expect you to do yours. You work for the American people, not the other way around.

I may not be from Kentucky but I have no qualms with engaging in political activism and seeing those who would refuse to perform their duties to be voted out of office. You don’t do your job, you don’t get to stay. That is how the real world works.

President Obama has a duty to nominate Supreme Court Justices whenever a vacancy exists. I believe he has already begun this task. When a nomination comes across your desk, I expect you to do your job and show leadership to others in the Senate. There is no reason to dawdle and force the next administration to deal with this situation (and it is very possible another Democrat will be elected).

There is plenty of drama already and the American public is tired of it.