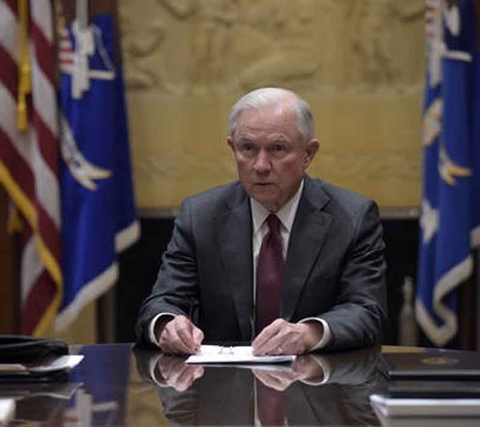 Attorney General Jeff Sessions’ closed-door, press banned speech to anti-LGBT+ group Alliance Defending Freedom finally saw the light of day last Thursday, although no thanks to the Department of Justice (DOJ). The conservative website The Federalist published the speech on July 13.

A DOJ spokesperson “confirmed the validity of the transcript to HuffPost on Friday,” according to the Huffington Post website.

Calling upon history, the Attorney General said, “Our concepts of religious freedom came to us through the development of the Western heritage of faith and reason. In America, Madison and Jefferson advanced those concepts. Their victory was to declare religious freedom to be a matter of conscience inherent in each individual, not as a matter of toleration granted from the top. I propose that in America our understanding of religious freedom can only be understood within that heritage.”

He called religious freedom a national commitment that has continued throughout our history.

Sessions made a point of reassuring the ultra-conservative group about conflict arising from the intersection of LGBT+ rights and religious freedom. The Huffington Post reported, “He did … appear to touch on the concerns of some Christian groups and business owners who say religious freedom should include the right to discriminate against LGBTQ people and women seeking access to reproductive rights.

“’In all of this litigation and debate, this Department of Justice will never allow this secular government of ours to demand that sincere religious beliefs be abandoned,’ Sessions said. ‘We will not require American citizens to give intellectual assent to doctrines that are contrary to their religious beliefs. And they must be allowed to exercise those beliefs as the First Amendment guarantees.’”

“The guidance will also help agencies follow the Religious Freedom Restoration Act. Congress enacted RFRA so that, if the federal government imposes a burden on somebody’s religious practice, it had better have a compelling reason. That is a demanding standard, and it’s the law of the land. We will follow it just as faithfully as we follow every other federal law. If we’re going to ensure that religious liberty is adequately protected and our country remains free, then we must ensure that RFRA is followed.

He did not expressly state that religious ‘rights’ would protect people who discriminate against LGBT+ people and others based on their beliefs, but nudged up against it, saying, “Under this administration, religious Americans will be treated neither as an afterthought nor as a problem to be managed. The federal government will actively find ways to accommodate people of all faiths. The protections enshrined in the Constitution and our laws protect all Americans, including when we work together, speak in the public square, and when we interact with our government. We don’t waive our constitutional rights when we participate fully in public life and civic society.”

Controversy over the speech continued, with the Alliance Defending Freedom fighting back against the Southern Poverty Law Center’s designation of the group as an “anti-LGBT hate group”. They demanded that ABC News retract a story in which they referred to the “hate group” designation. The ADF denies that it is a hate group.

The entire text of the speech is here.