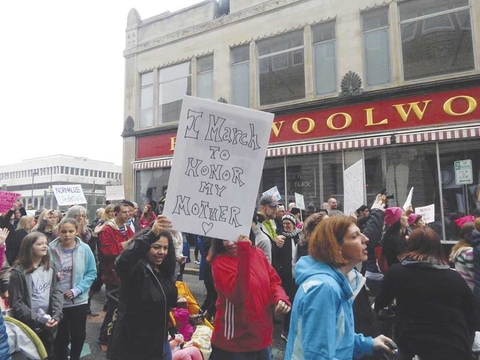 The rash of incidents, which range from boorish to downright vulgar, highlight how nasty political discourse has become since the divisive presidential election. AP photo by Cinde Ingram.

INDIANAPOLIS (AP) — A school board member in Hillary Clinton's hometown resigned after making a derogatory reference on Twitter to the female anatomy in describing women marching against President Donald Trump. An Illinois teacher was pulled from the classroom for a tweet deemed sexist. And a freshman Indiana lawmaker was inundated with criticism over a Facebook post mocking "fat women."

These are a handful of examples from across the U.S. of mostly male public officials who have been reprimanded, called out or disciplined over social media postings about the women's marches around the globe last weekend.

The rash of incidents, which range from boorish to downright vulgar, highlight how nasty political discourse has become since the divisive presidential election. But in an era when Trump made lashing out against "political correctness" central to his appeal, the consequences these officials face for unfiltered use of social media once again demonstrate that what you say on the internet still can hurt you.

"Very few people in public life, even today, get away with what Trump was able to get away with," said Michael Cornfield, a George Washington University professor who studies politics in the internet age. "I wonder what these gentlemen were thinking."

It's not the first time rantings on social media have sparked backlash. Public officials for years have found themselves in trouble, and even resigned from office, over comments that were impolitic, distasteful and sometimes even racist. It's also not strictly a partisan issue. A writer for "Saturday Night Live" was suspended this week after writing an offensive tweet about Trump's 10-year-old son Barron. The writer, Katie Rich, deleted the tweet, briefly deactivated her account and then apologized after a social media outcry led to calls for a boycott of the show.

Still, the number of incidents following the women's marches, which packed public squares in blue states and some red as well, has put a few elected officials and supervisors in an awkward spot. And it's not clear where to draw the line.

A weekend Facebook post by Indiana state Rep. Jim Lucas, a Republican, showed a photo of a woman sprayed in the face with pepper spray with a caption that read: "PARTICIPATION TROPHIES. NOW IN LIQUID FORM."

Sandlin, who said he didn't knowingly share the since-deleted post, was inundated with criticism on his Facebook page and has apologized. He said the incident was a powerful lesson on the "unintended consequences" of opening up "your social media to try to get it out as broadly as you can."

Bosma partially blamed "the Twitter storm created by our president," which he said "makes people feel this is an appropriate vehicle to communicate." He added: "We're elected officials, we're held to a higher standard."

On Monday, Dathan Paterno, a school board member in Park Ridge, Illinois, where Hillary Clinton grew up, abruptly resigned after he called the protests a "farce" by "vagina screechers" on Twitter.

Paterno, who did not respond to a request for comment, later deleted his social media accounts, said district Superintendent Laurie Heinz. He wrote in his letter of resignation that the tweets were "understandably misinterpreted."

In the Quad Cities, along Illinois' western border, a teacher was "removed from the classroom" for posting a view of women that "does not reflect the values" of the school, district officials said in a statement.

The teacher, Mark Kaczmarek, tweeted a photo of a 1950s housewife, and commented that the protesters "all went home to make dinner."

One online petition called his tweet "unacceptable," while a rival petition said there is "no proof" that he "ever engaged in any kind of sexist, racist or even homophobic hate speeches in his classroom."

A person who answered the phone at a number listed to Kaczmarek declined to comment.

In Nebraska, a state senator resigned Wednesday after he retweeted a joke implying that three women's march demonstrators in a photograph were too unattractive to sexually assault. Bill Kintner, who admitted last year to having cybersex on a state-owned computer with a woman who later tried to blackmail him, stepped down before legislators were to meet about whether to expel him.

Other incidents were reported in Mississippi, Rhode Island and New Mexico.

Cornfield, the political science professor, said that he thought most people learned the lesson about crossing the line in social media posts years ago during the early days of email.

"I guess now that we've elected the real Donald Trump some people need reminders," he said.

This story has been corrected to reflect that Nebraska state Sen. Bill Kintner resigned Wednesday, not Monday.