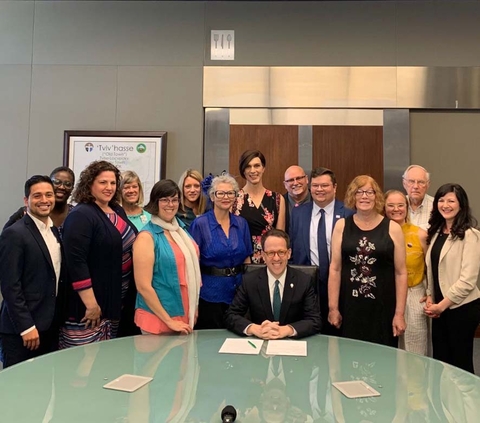 Mayor GT Bynum (sitting) with the Tulsa City Council and members of OkEq.

The Gayly received a copy of the Executive Order establishing the City of Tulsa’s non-discrimination policy from the office of the mayor.

WHEREAS, the Mayor  and City Council   aim for the City of Tulsa to be a globally-competitive, world-class place of employment; and;.'     ..

WHEREAS, the City is committed to being a leader in the areas of equity, diversity, and inclusion, which is essential to recruiting, developing, and retaining a competent and committed workforce that provides high-quality service to the citizens of Tulsa.

NOW,  THEREFORE, by virtue  of the power  vested  in me as the Mayor  of the City of Tulsa, Oklahoma, it is ordered:

That the City of Tulsa's Non-Discrimination Policy shall  be:

1.  Definitions: The following words as used in the application and interpretation of the Non­ Discrimination Policy have the following meanings:

b.   Sexual orientation is an employee's inherent or indisputable and enduring emotional, romantic or sexual attraction to other people.

c.   Gender identity is an employee's self-identification as male, female, a blend of both or neither, and may or may not match the sex assigned at birth.

2.   The City prohibits discrimination of City employees, or by City employees against any other person, on the basis of race,  color, sex, age, religion, national origin, disability, political beliefs, sexual orientation, gender identity, or gender expression.  However,  this policy does not confer any rights to employees that are not afforded by law.

“OkEq has worked on this for over a decade,” Jenkins added.

“I think it is very important that our workers in Tulsa are protected,” said Crista Patrick, Tulsa City Councilor. “They should not be discriminated against in their place of work.”

Patrick said she is married to a man but does identify as part of the LGBTQ+ community.

“As someone who has made most of my living in the arts community, many of my friends and family identify that way. It is of utmost importance to me that everyone feels and has that protection.

“I’m thrilled the city has taken this step to be a world-class employer.”