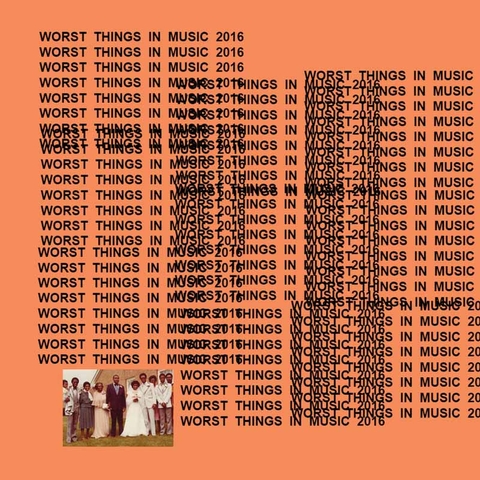 Listed from number 6 to number 1, here is Taylor's list of the worst things in music in 2016.

A surge of hate crimes was reported after the events of the 2016 presidential election. Among them included swastika graffiti defacing a playground in Adam Yauch Park in Brooklyn, New York City. The late Yauch, a Buddhist formerly known as “MCA” of the Beastie Boys, advocated peace and equality. Surviving bandmate Adam “Ad-Rock” Horovitz spoke at a rally on November 20 after the graffiti was removed, calling for positive change in the aftermath.

Seven years after the infamous incident at the VMAs, Kanye West made a crude reference to Taylor Swift in his song Famous. Swift insisted she did not give him permission to reference her in it; West’s wife Kim Kardashian-West posted video footage on Snapchat proving otherwise. Swift was publically shamed as a hypocrite; West spent the rest of 2016 in various stages of meltdown.

Sam Smith somehow won the Oscar for Best Original Song this year for milquetoast James Bond theme Writing’s On the Wall, over Lady Gaga’s heart-wrenching Til It Happens To You. In his acceptance speech, he misquoted Sir Ian McKellen by claiming no openly gay man had won an Oscar before. Humiliated by the press for his ignorance, he spent the remainder of the year mostly offline, speaking publically only after the Pulse nightclub shooting in June.

Lady Gaga’s comeback was hers for the spoiling. After strong nationally broadcast performances early in the year, she released Joanne in October. Joanne debuted a new country alter-ego but largely uninspired songwriting, completely unlike her best-known work. The album sold well for about two weeks; however, it was ultimately not warmly received outside of her devoted fan base.

Conservatives on social media needed their own safe space after the release of Beyoncé’s short film Lemonade. Shortly after airing, it was dissected for a week mostly by those with no business analyzing its themes of adultery, American blackness, and forgiveness. Beyoncé incited fury with her Black Panther-themed performance at the Super Bowl, then by performing at the CMA Awards with the Dixie Chicks.

If you really need to have Lemonade’s importance explained, ask your black friends about it.

Two years after suing her longtime producer for a litany of accusations, including sexual assault, bisexual singer Kesha was denied a preliminary injunction against Lukasz “Dr. Luke” Gottwald, which would have released her from her recording contract with Dr. Luke’s Kemosabe Records. The abuse charges filed in New York were dismissed in April, and Kesha would drop the charges filed in Los Angeles.

Kesha has been legally prohibited from releasing new music outside of the contract held with her alleged abuser, stagnating her career. The singer gained public support during the year, with Dr. Luke being reviled as callous and merciless. At press time, he has not released Kesha from her contract.