Sorry, NFL owners -- you blew it 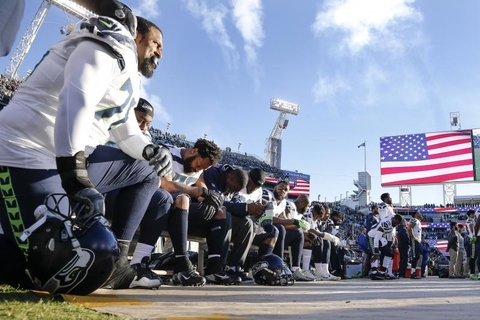 (CNN) -- By adopting a policy that could fine teams for players on the field who don't stand during the National Anthem, the NFL owners have settled on a highly questionable approach to the issue that President Donald Trump used as a battering ram against the league. And they failed to seize on a much better policy that would have taken the issue off the table.

The NFL has spent months agonizing over players refusing to stand during the National Anthem, but solutions were everywhere. Instead, the league's owners ignored the best one on Wednesday to worsen an issue that Trump used last season to help tweet the league into controversy.

When those NFL owners began their yearly spring meetings on Monday in Atlanta, after months of criticism over their league's handling of protests by players during the National Anthem to highlight social injustice, they discussed everything from assessing 15-yard penalties while fining players for kneeling during "The Star-Spangled Banner" to creating a wild, wild West approach by allowing all 32 teams to make their own rules.

By Wednesday, they'd lost their minds -- or possibly just panicked -- and agreed unanimously to give players and others associated with NFL franchises the option of remaining in their locker room for the anthem. Those owners added that, if players and others choose to take the field for the playing of the National Anthem, they can't sit or kneel or do anything else that doesn't involve standing -- or else.

Or else what? In its statement, the NFL left that part totally unclear. According to the new policy, players and other franchise people who don't "show respect" during the National Anthem will cause their team to get fined.

How much is the fine, and what do the owners mean when they say you must "show respect"? And why did the players union leadership proclaim during a statement that it would "challenge any aspect" of the new policy "that is inconsistent with the collective bargaining agreement"?

Nothing NFL owners did Wednesday will make those legal matters (or any others on the horizon from players) go away. In addition, there is little incentive under this new policy for a player with deep convictions not to kneel or to sit anyway during the National Anthem.

Whatever the fine, the players won't have to pay it, and NFL owners aren't exactly in soup lines. The league just approved the sale of the Carolina Panthers to hedge-fund manager David Tepper for a record $2.27 billion, and he's paying most of it in cash.

I'm guessing the players association will discover more than a few things with this new policy that don't jibe with the last collective bargaining agreement, signed in August 2011.

As for the biggest one, the owners didn't consult with the players before unilaterally deciding to do something that likely violates the First Amendment rights of the NFL's most important employees -- the players, the same players that these same owners tried to silence by throwing a few bucks at a few of their favorite social causes here and there (more on that below).

The NFL's old policy regarding the National Anthem also was nothing worth mentioning, either -- something along the lines that the NFL would encourage players to stand during the National Anthem. That was opposed to requiring them to do so, which meant that old policy gave quarterback Colin Kaepernick, safety Eric Reid and a slew of other players the right to do what they've done for two seasons.

While Kaepernick is out of the league, the players he inspired continued to use their kneeling and sitting to protest social injustice across the country directed toward African-American males in particular.

Thus the nasty tweets and curse words from President Donald Trump. The protests may also have contributed to the nearly 10% drop in TV viewership.

Near the end of last season, NFL officials puffed out their chests after they announced they would give the players $89 million for causes supporting the end to social injustice, but a couple of things here: That's nothing for a league that was projected to make $14 billion in 2017, and the players weren't falling for the football in the tailpipe.

About those players: They're mostly seething over the NFL's new policy, and Kaepernick and Reid are the epitome of why Wednesday's action won't solve much. They both played for the San Francisco 49ers, and Kaepernick was so effective that he took the team as quarterback to the Super Bowl after the 2012 season. Reid was a standout defensive player, and he joins Kaepernick these days as a free agent. Neither has gotten a serious call from another NFL team, and they are suing the league for alleged collusion.

Sorry, NFL owners. You were clueless during your spring meetings (beyond letting Tepper join your billionaire club and a few other minor improvements). The solution to your controversy involving players kneeling during the National Anthem wasn't difficult, and you blew it.

All you needed to do was go back to the future. Like any time before 2009, when NFL teams stayed in their locker rooms when "The Star-Spangled Banner" was played. For many who care about this debate, Notre Dame football is as patriotic as it gets, but the Fighting Irish are among many college teams that have their players and those of the visitors stay in their locker rooms during the National Anthem.

A simple answer. Too simple for NFL owners, apparently.