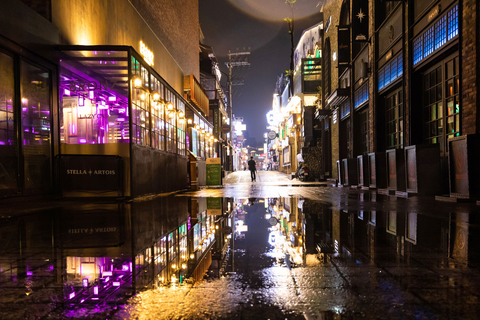 A person walks through the street at night in the Itaewon area of Seoul on Saturday. Photo by SeongJoon Cho/Bloomberg/Getty Images.

The country has won praise for its handling of the pandemic, but a fresh cluster of at least 86 cases has been linked to several nightclubs in the capital's Itaewon district.

Several South Korean media outlets reported last week that the venues were "gay clubs," though none of the venues describe themselves as such on their official websites or social media accounts.

Multiple reports also specified the age, district, type and location of work of the coronavirus patient believed to be at the center of the cluster. While the patient's age and district were posted by the city, details about the individual's work information were attributed in local media to unnamed officials.

At a news conference Monday, health ministry official Yoon Tae-ho warned that "leaking personal information of confirmed patients or spreading baseless rumors not only harms other but could be criminally punished," and said there was a trend of "criticism and hate against a certain group to which the infection occurred."

Homophobia is still rife in South Korea and the country is less accepting of same-sex couples when compared to nearby democracies like Japan and Taiwan.

LGBT advocates have strongly criticized the media's reaction to the nightclub outbreak. Advocacy group Solidarity for LGBT Human Rights of Korea said in a statement Thursday that "revealing sexual orientation of the patients ... adds stigma of disease upon the rampant homophobia in South Korean society."

The group added that recent reporting would drive coronavirus cases underground, make "self-isolation difficult and is a detriment to testing."

Eighty-six infections had been traced to the nightclubs in Itaewon district as of noon on Monday, South Korea's Centers for Disease Control and Prevention (KCDC) said, adding that 78 of those who tested positive were men and 76 were in their 20s and 30s.

"One must protect the personal information of infected and their family and also respect their privacy," KCDC deputy director Kwon Joon-wook said last Thursday, referring to reporting guidelines drafted by South Korea's journalist associations in April.

Thus far South Korea has managed to handle the pandemic without a strict lockdown. Instead the country has used a combination of widespread testing and contact tracing to contain the disease.