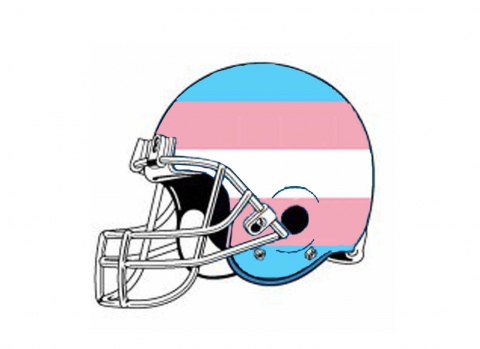 As she grew, Abby Scott of Monaca told her parents she was a boy and learned to play football. File graphic.

MONACA, Pa. (AP) — When Abby Scott of Monaca was 2, she told her parents she was a boy. As she grew, she disdained playing with Barbie and learned to play football.

For the past two years, the 8-year-old has refused to wear dresses or to let her mother do her long, curly hair, which has now been cut short. When a family member mentioned getting married someday, she said she would be wearing a tuxedo.

"She doesn't want to do anything girly," said her mother, Sara Markustic.

And that's just fine by Markustic and Abby's father, James Scott, who, like the rest of Abby's family, and mostly all of her classmates, teachers, teammates, friends and neighbors respect that Abby is a gender-fluid child, who identifies most of the time with being a boy. And when Abby is identifying as a boy — such as when she plays football or is wrestling — she prefers to be known as Adam.

Abby's gender-fluid story was to be featured at 10 p.m. Tuesday on "Friday Night Tykes: Steel Country," Esquire Network's reality series about football in Beaver County. Adam is a lineman for the Monaca Little Indians, playing in a league with boys who are years older. Besides Monaca, other teams on the series are Aliquippa, Ambridge, Beaver Falls, Blackhawk and Central Valley.

With Monaca's team numbers down because of injuries, head coach Ricky Suman's staff called up players from the younger program. "Adam's probably one of the young kids who has the most potential. ... I just feel with the options we're down to, Adam is our best bet," he says in the episode.

Being featured on the show was happenstance: The film crew overheard Markustic tell the coach that Abby preferred to be known as Adam on the field. They asked the mother if she would feel comfortable sharing her child's story with the show's viewers.

"If it helps one family to accept their child for who they are, then I feel I'm doing my job," Markustic said in a telephone interview. "I just accept her. She's a great kid. People try to form their kids into what they want. You can't do that. You have to let children be themselves. We stress that and let her be herself and accept her no matter what."

Suman said in the show that "I'm not going to judge you because you want to be a boy, or called a different name, whatever. You're still here to play football."

According to the American Academy of Pediatrics' website HealthChildren.org, "Most children's gender identity aligns with their biological sex. However, for some children, the match between biological sex and gender identity is not so clear. For some young children, expressing a wish to be or identifying as another gender may be temporary; for others, it is not. Only time will tell."

To deal with such issues and others of gender identity and sexual orientation, Children's Hospital of Pittsburgh of UPMC established the Children's Gender and Sexual Development Program five years ago. The program serves children and youth up to age 26 who have questions surrounding gender and sexual identity development, gender non-conforming behaviors and transgender care, according to its website.

Markustic estimates that for her child, the gender fluid split is 75 percent Adam and 25 percent Abby. She generally calls her child Abby and uses the female pronoun — except when it's sports-related — and said Abby doesn't mind. But if Abby eventually transitions to male, which Markustic expects will happen, she will gladly use Adam and the male pronoun.

Markustic, who has two other daughters and a son, ages 18 to 3, said she learned about gender-fluid children after joining an Internet forum for parents of transgender children. She and Scott have reassured Abby she is perfectly normal and they support her choices, including clothing — some days she dresses in girls' clothes and is Abby, but most days it's boys' clothes and he's Adam.

"You can tell from the moment she wakes up who she decided to be that day. It's just a totally different demeanor when she is Abby than when she is Adam."

Markustic said students, teachers and administrators at Abby's school, Todd Lane Elementary, have been supportive. So, too, have been her coaches and teammates on the football field and at Central Valley Youth Wrestling, where Adam compiled a 15-3 record his first year.

In fact, her starring role in the TV show has made her something of a celebrity at school.

Some adults haven't been as understanding, but Markustic dismisses them. "I don't need you if you don't accept my child." She wonders how those people would feel if their child came to them, as Abby did, and said: "I feel Adam is in my soul and Abby is in my stomach in a little treasure chest and sometimes I find the key and let her out."

There are decisions to be made, she acknowledges, such as whether to put Abby on puberty blockers.

She said her child is happiest when he's identified as Adam. "I want her story to be out there so that people understand there is this other community (of gender-fluid children) and maybe a parent hearing my story will say, 'My God, that's my kid.' "

Midway through tonight's episode, Markustic asks her child how she decides if it will be Abby, or Adam, when she awakens each day.

"If my teeth are brushed, or not," Abby replies. "Tomorrow, I probably won't be Abby, 'cause I'm not brushing my teeth tonight."

By Michael A. Fuoco. Copyright 2016 The Associated Press.