States failed to get absentee ballots to thousands of voters in recent primary elections, signaling problems for November 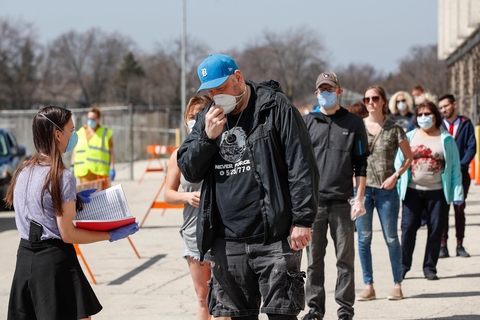 People wait in line to vote in a Democratic presidential primary election. Photo by Kamil Krzaczynski /AFP/Getty Images via CNN.

As Washington, DC's June 2 primary approached, Matthew Miller and Nima Sheth, married professors who live in the District, decided to vote absentee. With elderly, immunocompromised parents at home, plus a 1-year-old baby, it felt like the safest choice in the age of coronavirus.

So, they submitted requests for absentee ballots on the last day of eligibility, a week before the primary. They got a confirmation email from the DC Board of Elections. But Miller's ballot never arrived, and Sheth's ballot was sent to the wrong address.

Neither ended up voting.

"It wasn't a risk we were willing to take, at least for the primary," Miller said, "Though November might be a different story. You just don't think something like this could happen in a country like America, where, if you follow the rules, you should be able to vote."

Miller and Sheth are among tens of thousands of voters who didn't get their requested absentee ballots in recent primaries, including in the battleground states of Georgia and Wisconsin. In Maryland, where all registered voters were automatically supposed to get ballots in the mail, about 160,000 ballots, roughly 5% of those sent out, weren't delivered, officials say.

With five months to go before the November election, when an unprecedented number of voters will likely cast mail-in ballots, some glaring trouble spots are beginning to emerge. States' rush to expand absentee voting ahead of primaries this spring exposed logistical issues that, if not addressed, could lead to much bigger problems on Election Day.

This isn't the "massive fraud" that President Donald Trump falsely claims is happening -- a distortion he reiterated on Monday morning in an all-caps tweet. To the contrary, the frenzied rollout of mail-in voting has likely led to more eligible voters getting disenfranchised than voters fraudulently casting multiple ballots, according to a new CNN review of data from a half-dozen recent primaries.

The stakes couldn't be higher. For instance, about 14,000 absentee voters never got their ballots in Wisconsin, a state Trump carried in 2016 by only about 23,000 votes. If just 1% of absentee ballots aren't delivered to voters in key states this fall, that could tip the balance in a close presidential election and potentially trigger a constitutional crisis.

With issues cropping up in a handful of states, elections experts are warning about what could happen in November, and whether state officials, many of whom are still scrambling to calculate the extent of the problems, have enough time to fix them.

The coronavirus created once-in-a-generation challenges for how elections are run, so officials across the country have rushed to implement new policies and scale up mail-in voting.

For the most part, those efforts have gone smoothly. In West Virginia, rules were relaxed for who could qualify for an absentee ballot. In Nevada, officials pro-actively sent a ballot to ever registered voters. States with limited experience with mail-in voting saw record participation.

That appears to be part of the problem, as many states have been overwhelmed by a surge in demand. In Georgia, for example, more than 800,000 absentee ballots had already been cast one week before the state's June 9 primary -- a massive surge from 2016, when only 37,000 Georgians voted absentee.

There were similar upticks across the country, according to data from election authorities. About 97% of primary voters cast absentee ballots in Maryland, which held a nearly all-mail election for the first time ever. The figure was 83% in Rhode Island, 74% in Wisconsin, and 51% in Indiana, which kept some polling sites open for voters who still preferred to vote in-person.

But breakdowns have left tens of thousands of voters in the lurch. CNN spoke to registered voters in Georgia, Wisconsin and Washington DC, who said they followed the rules requested absentee ballots, and even sought assistance from local election officials, to no avail.

"That was the most frustrating part, going through all those hoops, requesting the ballot and finally getting it straightened out ... and then for them to send the ballot to the wrong address," said Cathy Lawton, 58, of Barton, Wisconsin, a small town in a reliably Republican county.

Lawton was one of about 14,000 voters in Wisconsin who never got the absentee ballots they requested, according to a spokesman from the Wisconsin Elections Commission. Some of these people may have been ineligible to vote, and others may have voted in-person once they realized their absentee ballot wasn't coming -- but Wisconsin officials don't track those figures.

These problems reappeared last week in Georgia: The state sent absentee requests to all voters, and county officials vastly reduced the number of Election Day polling sites. But when many voters in Atlanta didn't get the ballots they requested, they either gave up, or voted in person, crowding the same polling sites that officials hoped would stay relatively empty because of heavy mail-in voting.

State Sen. Jen Jordan, a Democrat who represents Atlanta, said she didn't get the ballot she requested, and that she heard from hundreds of constituents who had the same experience.

"It was members of the General Assembly, members of the board of education, someone who just ran for mayor, it hit everybody," Jordan told CNN, explaining that the issues affected everyone from first-time absentee voters to seasoned politicos who are running for office this year.

Stacey Abrams, former Democratic gubernatorial candidate in Georgia and founder of a voting rights group, herself received an absentee ballot with an unusable return envelope. Abrams had initially requested an absentee ballot in May, and said she decided to vote in-person on Election Day.

The Georgia Secretary of State's office told CNN that nearly 97% of absentee ballots were delivered to the right place before Election Day.

"The purpose of election administrators is to make sure there aren't so many accidents that people become disenfranchised," said Erica Long, 44, who works for the Atlanta Public Schools and never got her absentee ballot in the mail, so she braved the pandemic and voted in-person.

"Flattening the curve, for elections"

Election officials and voting rights experts see a silver lining in the fact that the pandemic hit early in the year, and not during the run-up to November. In that sense, the pandemic-era primaries were like a dry run, revealing hiccups in the system, even if they were predictable.

David Becker, founder of the nonpartisan Center for Election Innovation and Research, said states are trying to make changes in a few months that typically take years to implement. In western states like Washington and Colorado that conduct all-mail elections, local officials spent multiple election cycles testing their new systems and educating voters about the changes.

"This is flattening the curve, for elections," Becker said, referring to the public health strategy. "Each person who votes by mail is one less person who is standing in line on Election Day."'

Some of the polling sites that stayed open were flooded with voters, with colossal lines that stretched for hours. When states scale back the number of polling sites, it disproportionately affects minority voters, who tend to prefer the in-person voting experience, experts told CNN.

"We never miss an election," said Long, the Atlanta education professional, who is Black. "We like to go to our polling place and see our neighbors. It feels sort of festive."

In Atlanta, many of the polling sites were understaffed, as election authorities struggled to recruit volunteers to risk their lives during a pandemic. A report from the DC Board of Elections released Wednesday said the city "lost over 1,700 poll workers" in the run-up to its primary.

Compounding the problem, voters who had absentee issues needed to fill out additional paperwork before they could vote in-person, slowing down the process for voters still in line.

"Around the country, most of the people who operate these voting centers are seniors. But seniors understand the vulnerability of this pandemic," said Bob King, an adviser to six former DC mayors who now runs get-out-the-vote efforts for seniors. "They don't want to make that extra $125 to work at the polls. They're scared because of the underlying conditions they have."

Even with the emphasis on mail-in ballots amid the coronavirus, in-person voting will remain vital.

"It's just not possible to make face-to-face voting go away and run a fair election," said Barry Burden, professor of political science and director of the Elections Research Center at the University of Wisconsin. Burden said an "all of the above" approach is likely the best way forward: Make it easy to vote by mail but also keep as many polling sites available as possible.

States are trying to pick up the pieces from their primaries and make changes for November.

In Wisconsin, the US Postal Service is actively investigating issues with Milwaukee County absentee ballots, including one particularly egregious breakdown, where about 1,600 ballots were discovered in three USPS tubs at a post office in Chicago, days after the election.

The Wisconsin Elections Commission is set to implement changes for the general election. Officials on Wednesday approved a plan to send 2.7 million registered voters a mailer that includes an absentee ballot application. The commission also plans to improve ballot-tracking systems for absentee ballots that get sent in.

"The important thing is that we avoid the last-minute rush that occurred" before the April primary, election commission spokesman Reid Magney told CNN. "They have to act early."

Raffensperger, Georgia's top election official, also on Wednesday announced a set of proposals aimed at improving elections across the state ahead of November, including giving the State Election Board the power to intervene in county elections management. The proposals also include providing increased tech support to voting places to avoid the voting machine mishaps experienced last Tuesday, according to AJC.com.

Raffensperger also announced that he wouldn't repeat a program that sent absentee ballot request forms to Georgia's 6.9 million active voters. Instead he will create a website for voters to requests absentee ballots online.

In Maryland, where about 5% of ballots weren't delivered, the state election office conducted an "extensive voter outreach" effort to ensure voters received email ballots or were told to vote in-person.

In Washington, DC, local officials decided on Wednesday to switch to this pro-active approach for the fall. Voters needed to submit an absentee ballot request for the June primary, and many didn't come in time, according to interviews with local officials and frustrated voters.

A spokeswoman from the DC Board of Elections said they sent emergency email ballots to about 750 eligible voters who never got their absentee ballots. The spokeswoman, Rachel Coll, said these voters contacted the board of elections for help before Election Day, and that the board of elections doesn't know how many voters had this issue but didn't reach out, Coll said.

"I wasn't satisfied with the answers I got before the election. And the answers I got after the election haven't been consistent either," said DC Council member Elissa Silverman, who added that her staff received more than 500 complaints from voters. "I have a low level of confidence in the board of elections right now. And we need to get a high level of confidence for November."

This story has been updated to reflect the latest data from the Georgia Secretary of State's office, and to add context about who controls polling locations in the state.