Still no day in court for Tulsa lesbian couple 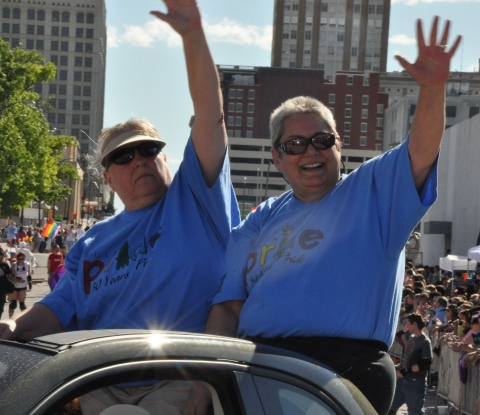 Pictured here, and also part of the lawsuit, are Gay Phillips and Sue Sue Barton as 2014 Tulsa Pride Co-Grand Marshal's. With Mary Bishop and Sharon Baldwin, the four co-defendants have a marriage equality case pending in Oklahoma. Photo by Robin Dorner.

TULSA, Okla. (AP) — A same-sex couple that sued for the right to marry knew they'd have an uphill battle in a conservative state like Oklahoma, but nothing like this: Nine years after filing their original lawsuit, they haven't had their day in court.

The national gay marriage advocacy group Freedom to Marry says the lawsuit filed by Mary Bishop and Sharon Baldwin is the longest-running active lawsuit against the Defense of Marriage Act. Their complaint, initially filed in November 2004, was revised in 2009 to name the Tulsa County clerk as a defendant but otherwise maintains its basic claim that they should be allowed to marry.

"While some people are getting their day in court and finding justice, we are sitting here, for nine years, with our hands tied," Bishop said.

Bishop and Baldwin met while working at the Tulsa World newspaper and have been together 17 years. They filed their initial lawsuit in November 2004, shortly after Oklahoma voters overwhelmingly passed a constitutional amendment banning same-sex marriage. A second claim, by Gay Phillips and Susan Barton, who had a civil union in Vermont and were legally wed in Canada, challenges a section of the Defense of Marriage Act that says individual states don't have to recognize same-sex marriages performed in other jurisdictions.

The duration of the case contrasts strikingly with the spate of lawsuits filed across the country in the past few months following the U.S. Supreme Court's ruling requiring the federal government to recognize same legal same-sex marriages. Indeed, the case that produced that ruling — involving 83-year-old New York widow Edith Windsor — reached the high court just three years after it was filed to protest an estate tax levied after the death of her wife.

In its decision in June, the Supreme Court ruled that section 3 of DOMA — which defined marriage as between a man and women — was unconstitutional. The DOMA aspect of the Oklahoma case centers on the Section 2, which says individual states don't have to recognize any same-sex marriages performed in other jurisdictions. The couples are fighting that, saying it's unconstitutional because it's a violation of the equal-protection clause.

Recently, the couple's lawyer filed paperwork drawing the judge's attention to the U.S. Supreme Court's June ruling, just in case the judge was waiting for that ruling to take place before he made his own.

"We've had absolutely no guidance from the judge in terms of what he's thinking, what his idea of is how this is going to proceed," Baldwin said.

It has crossed Baldwin's mind that the judge could be sitting on the case as a way to thwart it, because regardless of which side he rules in favor of, his decision will immediately be appealed by the losing party.

"Truly, if he wanted it to be a non-issue in Oklahoma, I'm almost thinking the way to do that is to sit on the case," Baldwin said. "Just let us have our day in court. I mean, we're being held hostage and the right of gays and lesbians and all over the state of Oklahoma are being held hostage."

A message left with Judge Terence Kern was not returned.

In 2006, the Tulsa couples' case made its way to the 10th U.S. Circuit Court of Appeals after the district court denied the governor of Oklahoma and the state attorney general's motion to dismiss the case. The appeals court ruled in 2009 that the couple lacked standing, so the two couples filed an amended complaint removing the governor and attorney general and adding the Tulsa County Court Clerk, since that is the person who issues marriage licenses.

A trial had been scheduled for May of last year, but it was delayed and placed on hold.

Evan Wolfson, president of Freedom to Marry, lauded Baldwin and Bishop for their persistence.

"Whatever the wisdom of a particular litigation in a particular state in the midst of a national movement for the freedom to marry, couples like Mary and Sharon who have gone the full mile to walk down the aisle attest to the undeniable fact that marriage matters, for gay couples as for non-gay," Wolfson said.

Associated Press Writer David Crary contributed to this report from New York.
Copyright 2013 The Associated Press. All rights reserved. This material may not be published, broadcast, rewritten or redistributed.