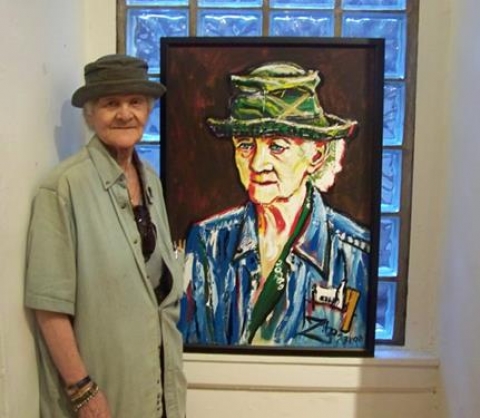 Storme DeLarverie was a veteran of the Stonewall riots in 1969. Photo courtesy of www.stonewallvets.org.

New York (AP) — A lesbian activist who took part in the New York Stonewall riots that started the gay rights movement in the United States has died. Storme DeLarverie was 93.

Her friend Lisa Cannistraci says she died Saturday at a Brooklyn nursing home.

DeLarverie was born in New Orleans to a black mother and a white father in 1920. In the 1950s, she was part of a traveling drag show called the Jewel Box Revue. Her friend says she "lived in adversity her whole life."

In June 1969, she was among those who fought against a police raid at a GreenwichVillage bar called the Stonewall.

The Stonewall Veterans Association website (www.stonewallvets.org) says of DeLarverie: “Stormé DeLarverie initially got involved with the STONEWALL Veterans' Association ("S.V.A.") when it happenstancely began spiritually the very first night of the Stonewall Rebellion, Friday, June 27th, 1969 at The Stonewall Club in Greenwich Village, NYC.  Stormé had just returned to New York City from entertainment touring with the famous Jewel Box Revue.  The S.V.A. officially formed exactly two weeks later on Friday, July 11th of that exciting year 1969.  Storme was there!”

Cannistraci describes her as someone who "just lived to be of service."

DeLarverie has no survivors. A funeral service is planned for Thursday.

by Deepti Hajela, Associated Press with additional information from www.stonewallvets.org.