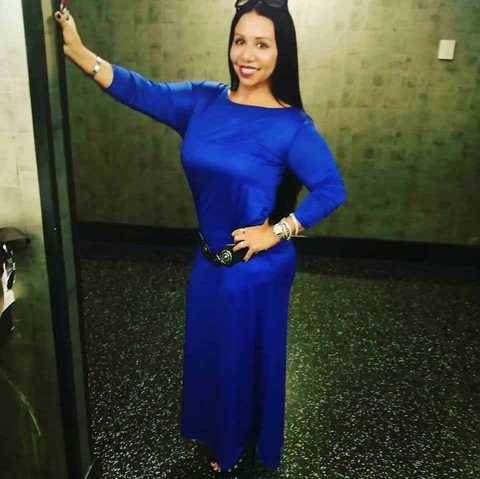 Maria Mejia is a sought out motivational speaker at gay, Latino and HIV-themed conferences. Facebook photo.

Sunrise, Fla. (AP) — As she's done hundreds of times, Maria Mejia stepped up to the podium, scanned the audience, took a deep breath and shared her story.

At 18, she learned she was HIV positive. By 28, she had AIDS. Those diagnoses eventually launched her on a mission to raise awareness about HIV prevention and the sometimes harsh realities of living with the virus.

The Sunrise resident has become an outspoken advocate for women and Latinos, communities that, 30 years into the AIDS epidemic, still grapple with fears and misconceptions about the disease.

Mejia, 43, is a sought-out motivational speaker at gay, Latino and HIV-themed conferences and events in South Florida and beyond. She blogs, posts updates on social media and records videos in English and Spanish.

"I'm Latina and a lot of Latinas don't want to come out of the HIV closet because of the stigma. We don't want to shame the family," Mejia said.

The Colombian native hid her diagnoses from family members for years for fear of rejection, but today, she's an open book.

"Is there less stigma than 20 years ago? Absolutely," said Dr. Stephen Fallon, executive director of Latinos Salud, a Wilton Manors-based nonprofit group that provides support and resources for Latino gay men. "In the 1980s and 1990s, many people living with HIV were dealing with the threat of losing their job, or being evicted, or being denied access to their family simply because they had HIV. While that's not unheard of even today, it's no longer the expected response."

Still, people from Latin American countries can face stigma that was more common in the 1980s, Fallon added.

"Many come from countries where the fear of HIV is so irrational ... that the stigmatizing rejection reaches full panic," he said.

'You will not die'

Sitting in her home, Mejia reflected on her journey as an HIV advocate and her highs and lows with the disease.

"Aging with HIV is horrible. The things that we go through because of pill fatigue, the post-traumatic stress, the depression, the anxiety of when of our brothers and sisters dies," she said, her eyes tearing up as she puffed on the vape pen she uses to quell anxiety.

Statewide, the proportion of new adult HIV infections among Hispanics increased from 21 percent in 2005 to 27 percent in 2014, according to the health department.

Mejia, who grew up in Miami, said she was infected by her first boyfriend, a former gang leader, through unprotected sex when she was 16. Her 1991 diagnosis arrived at a time when basketball player Magic Johnson had come out with his own diagnosis and AZT was the primary medication.

"It was a death sentence back then. People were dropping like flies," she said. "I had little knowledge of HIV. I never knew it could happen to me. It was not supposed to happen to me."

When she told her mom, Mejia recalled her saying, "You will not die from this."

Taking her mom's advice, Mejia decided to move to Colombia to help care for her elderly grandparents. She also worked at her mother's health food store and studied interior design.

In Medellin, she said there were no support groups for people living with HIV and a lack of medications. She told her family members that she had leukemia instead of HIV.

She was determined to stay healthy and resorted to all sorts of treatments for the following 10 years. She drank her own urine, based on a Japanese therapy. She consumed duck embryos with milk and chocolate. She became a vegetarian. Avoided alcohol and drugs. Tried acupuncture, meditation, prayer.

But "no matter how healthy I lived, worked out, I did everything I was supposed to do ... ultimately, I was diagnosed with AIDS in 2000," she said.

At the urging of her mother and a relative who was a doctor, Mejia returned to Miami for treatment.

"My doctor basically said, 'I can take you to the well but I can't make you drink water. If you don't take this medication, you are going to die,'" she said of taking Trizivir, an antiviral medication.

Mejia also began attending HIV educational workshops at Jackson Memorial Hospital, where she said a supervisor suggested she become a peer educator and HIV counselor. As a volunteer there, Mejia began sharing her story with support groups but she wasn't completely comfortable going public.

"As soon as they would say I want to interview you for a magazine or TV, I would say no because it would get back to Colombia," she said.

In 2009, when her partner's sister died of cancer, Mejia decided it was time to come out.

"I see so much compassion for people who have cancer but when you tell someone you have HIV, you get questions. I was tired of hiding. I was going to humanize this condition," she recalled.

Social media was exploding in popularity, and Mejia decided to harness its power. She created a handle: MariaHIVMejia.

"I knew I had to make a name that will attract others that are positive as well as those who are curious," Mejia said.

She launched a Facebook support group called International Place for People with HIV/AIDS and Those Who Love Us, with a version in Spanish. She also created a video journal.

"I feel like s---," she said in one video after she switched medication in 2011 to Atripla. I'm too young to go through this ... You don't need to be going through this."

She has chronicled visits to her doctor and pharmacy. In another video, as a nurse withdrew blood, Mejia looked at the camera: "This is the life you have to live when you are living with HIV. You don't want that."

It's not all in-your-face scare tactics. Mejia imparts hope and encouragement. Her videos show her lifting weights, traveling and enjoying life with her spouse, Li Laing, who has also appeared in some ads with Mejia for the Centers for Disease Control and Prevention.

Krista Martel, executive director of the nonprofit The Well Project, described Mejia as a nurturing person with a strong voice who is able to reach many different people.

"She is very open, and sharing her experiences helps other people feel less alone with their experiences," said Martel, whose group aims to educate girls and women about HIV. Mejia works as a part-time ambassador for the international group based in Brooklyn, N.Y. Mejia is also a paid social media consultant for Janssen Pharmaceutical. She said half of her advocacy work is volunteer. "To have someone like Maria be so public and expressing her own evolution from that place of self-stigma to a place of self-acceptance is very empowering. It helps people feel less shameful and stigmatized," Martel added.

It's just shy of 3 p.m. on a recent rainy Thursday. Mejia's phone pings with email alerts or Facebook notifications from people looking for support.

"I live and breathe this," Mejia said. "It is my moral duty. This is my passion. I want to humanize it. I'm not sick. I'm just surviving."