Tell your legislature to knock this crap off 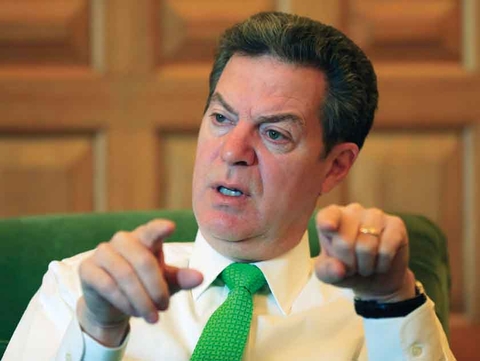 Brownback said, “Eliminating income taxes on small businesses is like a shot of adrenaline straight into the heart. It will jolt our state and give us a dynamic growth.”

Instead, it rained economic catastrophe on Kansas. Social services and education funding fell and the economy, far from dynamic growth, descended into chaos.

The GOP controls all states in The Gayly region.

Yes, Republicans control all these states. In my opinion, their strategy is to starve government by passing ill-advised tax cuts, moan about the shortfalls and then proceed to cut needed services.

Education usually takes it on the chin; next in line is Medicaid, the source of healthcare for hundreds of thousands of low-income people in our five Gayly states.

Mental health care is particularly hard hit; many of our mentally ill citizens are either in prison or homeless. They receive almost no care.

At the national level, it’s no better. In December, Congress passed a tax cut bill that mainly benefits the wealthy and corporations.

This situation, in our region and at the national level, is an outrage.

I’ve been paying attention to politics since I was 16 or so until now, a span of over 50 years. My firm belief has always been that we need to work together to figure out what we want to do, what it will cost and then how will we pay for it. If we can’t pay for it, we need to revisit the process.

The solution isn’t to cripple government in advance and then cut things that are important to the health and livelihood of our people. That is mean-spirited, irresponsible and corrupt.

We have the opportunity in our states to turn back this know-nothing bunch of losers destroying our states and the federal government. The results in Kansas in 2016 were great. Results in special elections have also been great in Oklahoma, Missouri and around the country.

When your state legislator or a legislative candidate comes to your door asking for your vote, ask them where they stand on the issue of responsible funding of government and services and tell them that your vote depends on their answer.