There are more LGBTQ characters on television than ever before 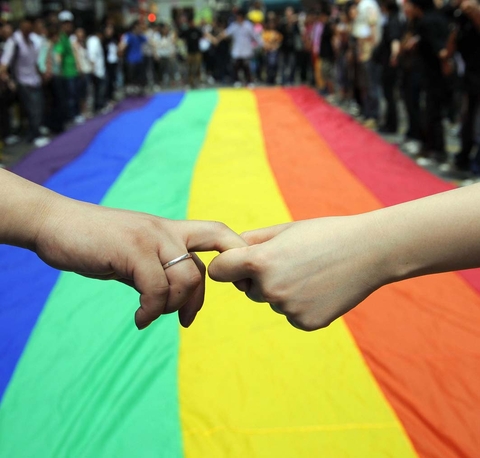 A record-breaking number of LGBTQ characters will appear on broadcast television by the time this year's season is over.

A total 10.2% of regular characters in the 2019-2020 broadcast television season are reported to be LGBTQ, according to GLAAD's "Where We Are on TV" report. That's up from 8.8% the prior season.

The latest tally marks the highest number of LGBTQ characters on broadcast television in the 24 years GLAAD has been tracking the information.

In addition to broadcast, the report also looked at LGBTQ representation on cable and streaming shows, finding important developments on all three platforms.

Shows like "Pose," "The L Word: Generation Q" and "Batwoman" emerged as strong examples of LGBTQ representation this season, as well as "9-1-1: Lone Star," "Sex Education" and "Dear White People."

Here's why it matters: TV directly impacts how we perceive our own culture and identities, GLAAD says. That's why it is especially important to feature a diverse and realistic lineup of LGBTQ stories and characters.

As of 2017, Gallup estimates 4.5% of Americans identify as lesbian, gay, bisexual or transgender. This number does not include those who identify as queer.

"It is not enough just to have an LGBTQ character present to win an LGBTQ audience's attention," says Sarah Kate Ellis, president and CEO of GLAAD. "There needs to be nuance and depth to their story, and the slate of characters should reflect the full diversity of our community."

An increase in racial diversity in cable and broadcast

The racial diversity of LGBTQ characters on broadcast and cable saw a significant increase this year as well.

This is the second year in a row in which LGBTQ people of color have outnumbered white LGBTQ people on broadcast television, the report found.

ABC and The CW lead the broadcast networks in racial diversity, with a little over 50% of their series regulars being people of color.

The streaming platforms continue to see a drop in diversity among LGBTQ characters year-after-year, the report found. Just 41% of the 153 LGBTQ characters are people of color, marking a 7 percentage point drop from the previous year.

Transgender, lesbian, and HIV/AIDS representation is up

Across broadcast, cable, and streaming platforms, these three groups have seen bumps in character numbers, the report found.

"According to recent polls, less than one quarter of Americans say they personally know someone who is transgender," the report states. "This means that what the majority of Americans know about the trans community comes from what they see in the news and entertainment media.

"This is why it is so important that Hollywood be inclusive of trans characters which reflect the full diversity of the community, and that they tell a wide range of stories in the same way that stories about cisgender people are told."

Just two shows -- "Pose" and "The L Word: Generation Q" -- account for more than a quarter of transgender characters across all platforms.

This season, GLAAD counted nine HIV-positive characters, an increase of two characters from last year. Several of these characters, however, are in a series that is being canceled or had a limited run, meaning that there will likely be a significant drop in this number next year.

The number of lesbian characters on cable and broadcast continues to increase annually, as well. GLAAD reports 33% of broadcast and 30% of cable LGBTQ characters are lesbian, both jumps from the prior year.

Asexual representation has been slashed

There are no asexual characters expected to appear on current or upcoming primetime broadcast series.

When Freeform's "Shadowhunters" was canceled, the number of asexual characters was essentially cut in half, followed by the decision to retire Todd Chavez's character in Netflix's "BoJack Horseman," severely diminishing asexual representation.

GLAAD did not identify any new asexual characters expected to be added in the coming year.

A few shows have risen as champions of LGBTQ narratives

Netflix has emerged as the streaming service to hold the highest number of LGBTQ regular and recurring characters on their scripted original series with 121 characters. Its competitors, Hulu and Amazon, have 24 and eight LGBTQ characters, respectively.

FX's show "Pose," which spotlights New York's underground ball culture in the 1980s, continues to be a strong point of representation. It features the only four HIV-positive characters on cable and has also played a significant role in increasing the amount of black and Latinx characters on TV.

The upcoming series "The L Word: Generation Q," slated to air on Showtime in December, is a modern revival of the original 2004-2009 show. Its LGBTQ-packed cast plays a large part in making Showtime the cable network to feature the biggest number of LGBTQ characters, the report found.