Is there bi-erasure within our community? 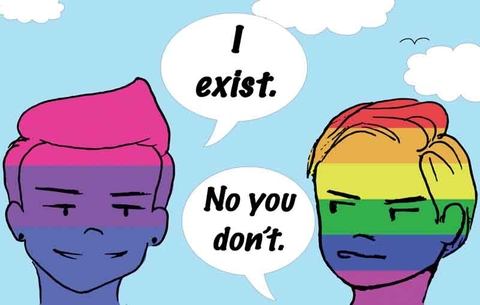 Stroll through any store in the metro and literally dozens of choices of everything from bread to toothpaste to laundry detergent and cookware. These items stare at you from the shelves vying for your attention.

As a culture, Americans expect choices; except when it comes to sexual expression. We get a little uptight about that. Actually, some among us get very uptight, and that has made writing this article challenging for me.

As with any other topic, I researched this one fairly thoroughly and was distressed that persons who may be aroused by both men and women seem to be regarded as fraudulent in their assertions of bisexuality (or queerness, gender fluidity, or pansexuality). Both straight and gay/lesbian individuals seem to discredit the legitimacy of bisexual persons even though the B in LGBT is there for a reason.

According to the Human Rights Campaign, bisexual persons may make up the largest component within the LGBT+ community, but people who feel attracted to both men and women and who engage in sexual relations with both men and women remain largely invisible.

Prevailing attitudes about bisexual persons is that they are “confused” about who they are or that they are in denial about being gay or lesbian. They might be afraid to be themselves, so they “pretend” to be heterosexual or gay/lesbian.

Even intimacy issues come into question. Does emotional arousal and intimacy count if no physical sex is involved? If a bi person engages in a long-term relationship, does that mean that they are really straight or gay?

Perhaps I’m naïve, and I’ll own that, but I’ve always taken people at face value. If you tell me you’re straight or gay or bi, I’ll believe you, but I understand that not everyone does. This lack of respect for people’s self-identification has increased health risks for persons who identify as bisexual.

Bisexual youth often report having less access to supportive adults and research shows that they have a higher incidence of alcohol and substance abuse. They also engage in riskier sexual behaviors, possibly to be accepted and feel loved and understood.

It is very important that allies learn as much as possible about individuals who identify as bi to provide a better support system for them. Healthcare providers also need to educate themselves about possible risk factors for these individuals and about the fact that identifying as gender fluid individuals often makes them invisible.

Regardless of their orientation and preferences, they are our sons and daughters, our brothers and sisters, our parents and our grandparents. And we are all human and deserve the same acceptance and love as anyone else.
Being inclined to love more than just the opposite or same sex only isn’t a crime. There is room for everyone within our non-binary gender-fluid community.