Thomas hints at split in court 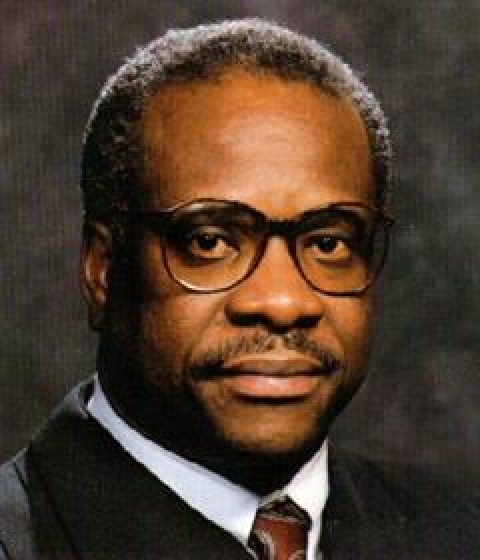 Washington (AP) — Justice Clarence Thomas is suggesting that the Supreme Court was divided over whether to hear the gay marriage cases the justices rejected last month.

Thomas offered a peek Thursday at what happened behind the scenes when the court turned away appeals from Indiana, Oklahoma, Utah, Virginia and Wisconsin on Oct. 6.

At the time, the justices said nothing to explain their action and there was no way to know whether the court was unanimous.

But Thomas made reference to the same-sex marriage cases in a statement he attached to a high court order in an unrelated immigration case from Arizona.

He said he doesn't understand why the court did not hear appeals from the states that sought to preserve their bans on same-sex weddings.

The court often reviews decisions striking down state laws. "But for reasons that escape me, we have not done so with any consistency, especially in recent months," Thomas wrote, joined by Justice Antonin Scalia.

It takes four justices to grant review of a lower court decision.

Justice Ruth Bader Ginsburg has said the court did not get involved then because lower appellate courts had all ruled the same way — in favor of same-sex couples.

But last week, the federal appeals court in Cincinnati upheld anti-gay marriage laws in Kentucky, Michigan, Ohio and Tennessee and created a division that the Supreme Court is expected to resolve.

Alito told about 1,500 guests at a dinner of the conservative Federalist Society on Thursday that freedom of speech deserves special protection so people can live in a free society. But he also defended standing alone from his colleagues on the court in some cases where he refused to protect hateful or violent speech that he says has no value.

Alito sided with conservatives in the 2010 Citizens United case when the court held that corporations have free speech rights to spend unlimited amounts of money in elections. Yet he offered vigorous dissents when the court — in two 8-1 decisions — extended that protection to animal cruelty videos and protesters at military funerals. Alito also joined Justices Antonin Scalia and Clarence Thomas in dissent in another case where a 6-3 majority said the First Amendment allows a person to lie about receiving military awards.

In those cases where he dissented, "the expression caused great harm and had, as far as I could see, absolutely no value," Alito said. "So I think it's appropriate to impose some restrictions on speech in an area like that, which just seems to me quite far from the core of the First Amendment."

Alito also touched on privacy rights in the electronic age when he suggested that Congress and state legislatures should examine how to protect the use of new forms of technology. He mentioned the Supreme Court's unanimous ruling earlier this year that police generally may not search the cellphones of people they arrest without first getting search warrants.

"Federal judges are not generally the most in the forefront of understanding and using and having the feel for these new forms of technology," Alito said. It would be helpful, he said, for legislatures to express views of the people "on what their expectations for privacy are in this new age."

When the justices speak in public, as they do fairly frequently these days, the only rule about whether cameras are welcome is that there is no rule.

Alito forbade video cameras during his appearance, but his remarks were otherwise open to reporters and still photographers.

Scalia often places the same restriction on video. But when he spoke to the Federalist Society Thursday morning about the Magna Carta, it was come one, come all.

Scalia's talk didn't produce much news, but the justice got a kick out of quoting from a late 13th century document affirming key principles of the Magna Carta and declaring invalid any judgments contrary to the landmark declaration of rights and liberties— "holden for naught," in the words of King Edward I of England.

"That's great stuff, 'holden for naught,'" Scalia said. "I'm going to put that in one of my opinions."