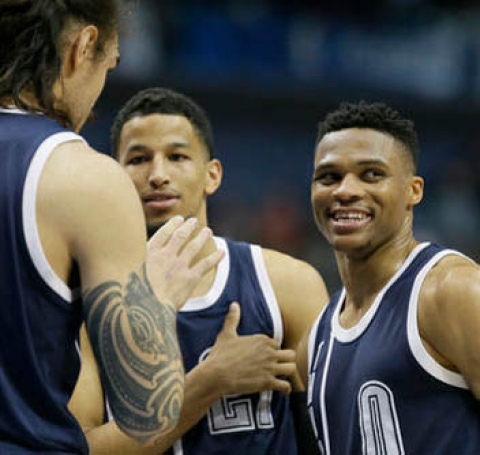 Dallas (AP) — Kevin Durant got ejected, Russell Westbrook was part of a shouting match in front of his bench and Serge Ibaka drew a technical for throwing an elbow in the final seconds with the outcome already decided.

Regardless, the Oklahoma City Thunder are now in firm control of a testy first-round series that got quite a bit testier.

Westbrook had 25 points and 15 assists, Durant added 19 points in a quiet game before he was thrown out following a flagrant foul in the final minute and the Thunder beat the Dallas Mavericks 119-108 on Saturday for a 3-1 series lead.

Going into Game 5 on Monday night in Oklahoma City, Durant doesn't think things are getting out of hand despite several tense moments that included Dallas team security making sure he didn't leave the court in front of the Mavericks bench after his ejection.

Enes Kanter had his second straight playoff career high with 28 points on 12-of-13 shooting for the Thunder, who never trailed in two games in Dallas after the Mavericks evened the series with a one-point win in Oklahoma City following a 38-point loss in the opener.

Dirk Nowitzki had 27 points and eight rebounds for the Mavericks, who stayed close in the second half after a Game 3 blowout but couldn't get the deficit inside seven in the second half. Dallas hasn't won a playoff series since winning the 2011 NBA title.

After Dallas coach Rick Carlisle called out Durant while complaining during the off day over what he essentially said were dirty plays by the Thunder in Game 3, the teams had a confrontation in front of the Oklahoma City bench early in the second quarter.

That flare-up started when Anthony Morrow, who was sitting on the bench, refused to give the ball to Salah Mejri after the Thunder threw it out of bounds.

Dallas guard J.J. Barea confronted Morrow, a former Maverick who then shoved Barea. Westbrook and Mejri ended up nose-to-nose in a shouting match before all the players were separated by coaches and officials.

Westbrook and Mejri got double technicals, and the Thunder were called for delay of game.

In the second half, Westbrook appeared to shout an expletive toward the fans after getting tangled up with Mejri on a drive. Mejri, who left the game in the fourth quarter with a right hip injury, was called for a foul.

Durant's hard foul on Anderson, who went to the same high school as Durant near Washington, came with 50 seconds left. And 30 seconds later, Ibaka got a technical for throwing an elbow at Charlie Villanueva.

"The name of the game is come out and play basketball and that's what we've done the last two games, especially here," Westbrook said. "We know a lot of their game is to kind of muck up the game and I think we're doing a great job of staying above it."

Besides calling out Durant during the off day for the elbow that led to the NBA's technical foul Friday, Carlisle said there were three other "non-basketball physical escalations that were initiated by them." He had no interest in continuing the discussion after the game.

"I'm not talking about that," he said after cutting off the first question. "You got questions about basketball?"

Carlisle said point guard Deron Williams was finished for the season after he lasted all of 89 seconds trying to return in his continuing battle with a sports hernia that kept him out of Game 3. He limped to the locker room with 10:31 remaining.

Williams aggravated what is being called a left abdominal strain while chasing a loose ball and running into the scorer's table just 40 seconds into the game.

Barea played despite a right groin strain that kept him out of Game 2 and will limit him as long as the series lasts. He had his worst game, going scoreless on 0-of-7 shooting.

By Schuyler Dixon, AP Sports Writer. Copyright 2016 The Associated Press. All rights reserved. This material may not be published, broadcast, rewritten or redistributed.