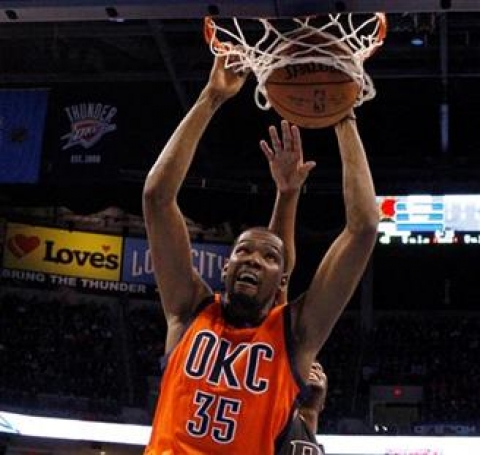 Oklahoma City (AP) — The Thunder looked more like they usually do on Sunday night.

Kevin Durant had 32 points and 11 rebounds and Oklahoma City beat the Phoenix Suns 124-103 to snap a three-game losing streak.

Russell Westbrook had 21 points, 13 assists and six rebounds, and Enes Kanter had 21 points on 9-of-10 shooting for the Thunder, who forced 23 turnovers and outrebounded Phoenix 52-33.

"I thought we were impressive tonight," Westbrook said. "We did a better job of being aggressive and not letting people come at us, which led to us doing what we do — getting out into transition and getting steals."

Dion Waiters added 19 points and the Thunder shot 52 percent overall and 61 percent in the second half.

Oklahoma City opened the season with three straight wins, then lost the next three by a combined 16 points. The Thunder never led Phoenix by fewer than nine in the fourth quarter.

Eric Bledsoe had 28 points and 11 assists, but he was held to eight points on 3-for-6 shooting in the second half.

"Pick-and-roll coverage was a lot better in the second half, and we did a good job of keeping the ball in front of us," Westbrook said.

Markieff Morris scored 19 points and T.J. Warren added 17 for Phoenix, which lost for the third time in four games.

The Thunder led 60-54 at halftime. A wild sequence during which the Thunder nearly turned the ball over several times ended with an easy layup for Andre Roberson that gave Oklahoma City a 76-63 lead in the third quarter. A fast break led to a nifty bounce pass from D.J. Augustin to Kanter, who scored and was fouled. The free throw bumped Oklahoma City's edge to 89-75.

The Thunder reserves, who were badly outplayed in the first half, handled business early in the fourth quarter. A fast-break dunk by Mitch McGary put Oklahoma City up 96-81 with just under 10 minutes to play.

After some of the starters returned, Durant hit a pull-up 3-pointer, then a fast-break layup to make it 110-90 with six minutes remaining.

"It's hard to come back from a team that shoots the ball so well when there is no pressure on them with the lead, when it seemed like they made every shot," Phoenix coach Jeff Hornacek said. "They outplayed us."

Westbrook, the league leader in assists, has 10 or more dimes in five of his first seven games. He now averages 10.9 assists, to go along with 26.3 points and 7.0 rebounds per contest.

The Thunder shot 75 percent in the fourth quarter to make up for committing seven turnovers.

Bledsoe had eight assists and one turnover in the second half.

Hornacek, on Westbrook's rebounding: "When he shoots the ball, by the time he hits the floor, he's going back after the rebound. He had three or four of those tonight. ... That is just being relentless and wanting the ball."