"This Title Has Been Censored" 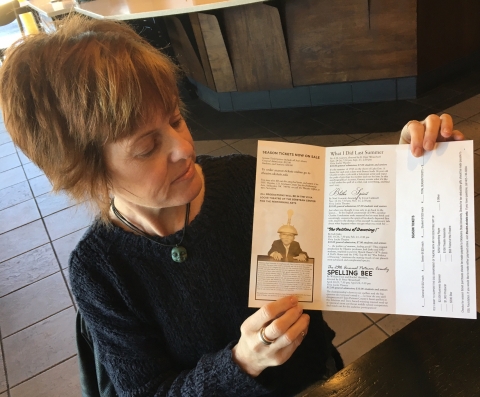 Professor Jodi Jinks looks at the OSU Main Stage Theatre brochure. Her play will not be seen: the voices will not be heard. Photo by Robin Dorner.

Professor Jodi Jinks was devising a piece of theatre with her students last fall when it began to shape around transgender issues surrounding the question, “Does gender really matter?” The title decided upon for the play was The Politics of Dancing. The name was coined from the 80’s song by the same name by the band Re-Flex.

The group was looking at A Doll’s House – a Nineteenth Century play written by Henrik Ibsen, said professor Jodi Jinks. The play is about a woman leaving her husband to discover herself – something unheard of in that time period.

“We were going to take this play and deconstruct it through the lens of gender politics, relationships, identity and everybody was to make this play together,” said Jinks. “Throughout the process of creating, you are making a play the whole time as you are writing things and making it an original piece of work, adding scenes, and of course this was just the early part of the process.”

Jinks goes on to explain, “In October I gave drafts of three scenes to people in the department who were to be set designers, lights, etc. and one to Professor Kimbrough.”

Dr. Andrew Kimbrough is a Professor and Head of the Department of Theatre at OSU.

According to Jinks, Kimbrough came back to her and said he felt the play was in bad taste and the subject would offend “our patrons and donors.” At this point, Jinks said the department head had only seen rough drafts of a couple of scenes.

“It was only two-to-three scenes of a full length play in infancy with four months of writing yet to be done,” exclaimed Jinks. “He gave us an option of either changing the play’s direction and gearing it toward an ‘older, white, conservative audience which could be presented in the Vivia Locke Theatre as planned, or produce the student devised play in the Davis Studio space saying what the students felt needed to be heard.’”

But in a statement to The Gayly Kimbrough said, “The Department of Theatre faculty voted to move the production from the main stage to the studio season stage after observing the production move in a direction which was not originally proposed and approved by the faculty Season Selection Committee.”

“All other options were removed as to where we could perform and what we could do,” Jinks exclaimed. “That’s when Politics of Dancing was put to rest and the students decided to make a piece reflecting their own gender politics. That’s where, This Title Has Been Censored came in.”

The Mary Lou Lemon Endowed Professorship is dedicated to giving people a voice who don’t have a voice.

According to Kimbrough, “The Mary Lou Lemon Endowed Professorship in Theatre encourages excellence in teaching, research and scholarship in the Theatre Department in the College of Arts and Sciences at Oklahoma State University. The position focuses on underrepresented voices in perpetuity at OSU, ensuring that the professional interest in subjects that affect underrepresented voices will be held by the individual holding the Mary Lou Lemon Professorship in Theatre.”

“We want to involve these kids that put all this hard work in to this,” Lemon added.

“The students were crestfallen,” Jinks said with great sadness. “There were members of the class who took the class specifically to perform on the larger Vivia Locke stage.”

Once The Politics of Dancing was censored – they finally said, let’s talk about our own experience with gender identity...they wrote a different piece. This Title Has Been Censored was a totally different workshop performance and was performed with no lights, no sound…no support at all and their only option was to perform during final exam period.

The students also added, tongue-in-cheek, “an off-off Vivia Locke Production of…” in their own brochure!

Disputing this lack of justice, Jinks added, “It’s freedom of speech for the kids.”

In asking Kimbrough if he feels he has a responsibility to cover theatre from all areas of the spectrum, he responded in saying, “Yes, and that is one of the guiding principles of the faculty Season Selection Committee.”

Jinks said her department head could have marketed this process as interesting saying something like “Look at how interesting our kids are, what they created” and add information in the press about the content when the event is promoted.

“I think that it’s important that people in power have a sense of responsibility to everyone and this is a way for everyone to learn about the issue,” she added. “Politics and art – producing theatre is a very complicated issue…the kids’ play was cancellable and I want to teach my students what the purpose of their art is.”

Jinks concluded saying, “It’s exciting that art has this much power.

Jodi Jinks is the Endowed Professor of the Mary Lou Lemon Professor of Theatre at Oklahoma State University (OSU) in Stillwater and the OSU Assistant Professor of Theatre. She was awarded the Mary Lou Lemon Endowed Professorship in 2014 to support her work with ArtsAloud-OSU, which devises performances not only with university theatre students, but also with prison populations. Prior to her career in university teaching, Jinks worked as an actor on film on Broadway and Regionally.