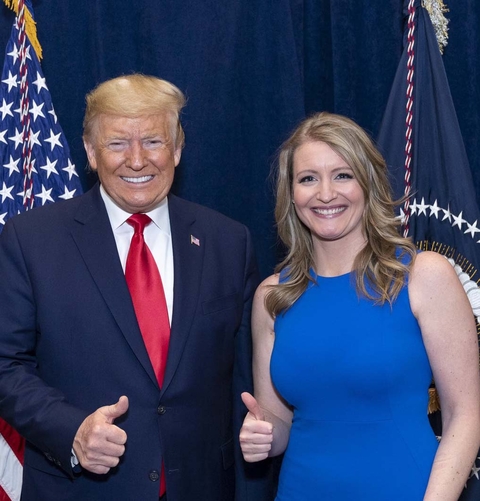 A top adviser and lawyer for President Donald Trump's re-election campaign has a history of pushing anti-gay positions, including linking the legalization of same-sex marriage to bestiality and pedophilia.

Ellis' comments, reviewed by CNN's KFile, were made between 2014 and 2019, before she emerged from relative obscurity to join the Trump campaign in November 2019. Ellis criticized the Supreme Court's Obergefell v. Hodges ruling that legalized same-sex marriage nationwide, and predicted it would lead to societally accepted and even legalized bestiality and pedophilia. "We are saying any sexual urge is valid," Ellis said in 2016. "So pedophilia, why is that any different than any other form of love? Love is love, right?"

She has since become a prominent surrogate for the President on TV and radio, defending him during the impeachment trial and praising his handling over the coronavirus pandemic. She drew attention this week when she defended the President from criticism on Monday after a terse exchange with two female journalists led to Trump walking out of the press conference.

After a Twitter user challenged Ellis for applauding Trump's walk out, Ellis tweeted, "This is coronavirus press conference number, what, probably somewhere in the 50s? POC liberal women have been present at every one of them and asked stupid questions. Sometimes for HOURS. This is the first time he's just walked off. Finally. You know nothing. Stop gaslighting."

CNN reached out to Ellis and the Trump campaign for comment but neither responded.

Ellis's rise in the Trump orbit comes as the Trump administration has rolled back some Obama-era measures designed to advance LGBTQ equality, including rescinding rules on bathrooms for transgender students, effectively banning transgender people from joining the military and moving to scrap anti-discrimination policies for LGBTQ healthcare patients.

In a 2016 presentation to a conservative activist meeting in Denver called "The U.S. Constitution and It's [sic] Origins," Ellis said that legalizing same-sex marriage would set the stage for legal pedophilia and bestiality.

"We're going to completely ignore what the truth says, what God says, and we're going to redefine marriage," said Ellis, arguing that the Obergefell decision that legalized same-sex marriages nationwide would lead to "consequences" such as bestiality and pedophilia.

"It doesn't yet impose restrictions on churches or First Amendment privileges, but we're heading there. And it's setting the stage for polyamory, bestiality and eventually pedophilia," she said.

Speaking in May 2016 on Apologetics.com's radio show, a Christian advocacy program airing on Los Angeles-area radio and the internet, Ellis added she thought bestiality and pedophilia would soon be viewed as valid.

"What's going to happen with that is that ultimately things like bestiality is going to be approved and especially pedophilia," she said. "Because like I said, how the progressives are attacking these issues in multiple ways. I really predict that in the next few years even pedophilia is going to be more and more accepted because two things are happening. One, we are saying any sexual urge is valid. So pedophilia, why is that any different than any other form of love? Love is love, right?"

In her 2015 book, she wrote that by allowing "sexual expression" to "continue to pervade any sense of boundaries or morality...the homosexual slogan 'love is love' will become the mantra of the pedophile."

She also wrote that the ruling legalizing same-sex created a "constitutional crisis greater than we have ever faced since the original Constitutional Convention in 1787" for Americans.

Ellis has also repeatedly said the Supreme Court "ignored the immorality of homosexuality" in its decision to strike down laws that criminalized same-sex sexual activity.

"So then we get to Lawrence v. Texas, which was a Texas law criminalizing sodomy," Ellis said at the Constitutional Literacy for Christians conference in February of 2016. "And judicial activism ignored the immorality of homosexuality and created this fabricated right to privacy that was in the penumbra of the Constitution and determined that homosexuality is within that right to privacy in the penumbra of the Constitution. And the Supreme Court with judicial activist motivations overturn that law."

In her 2015 book, "The Legal Basis for a Moral Constitution," Ellis said the Lawrence ruling "set the groundwork for open celebration of homosexuality and all kinds of deviant sexual behavior with any coupling or grouping."

Speaking on the Apologetics.com radio show in 2016, Ellis added that the courts' "biblical worldview" had been replaced with a "secular humanist" view, allowing the legalization of homosexual activity.

"Once it got to the Supreme Court level where we were saying, OK, we have all of these laws that are very moral. Like abortions can't happen, like, um, homosexual activity is still illegal," Ellis said. "And these very moral laws that were on the books, there was a lot of pressure on the Supreme Court to say, well, I have the right to do that. The culture wanted to redefine right as not the unalienable rights that God gives every person consistent with biblical truth."