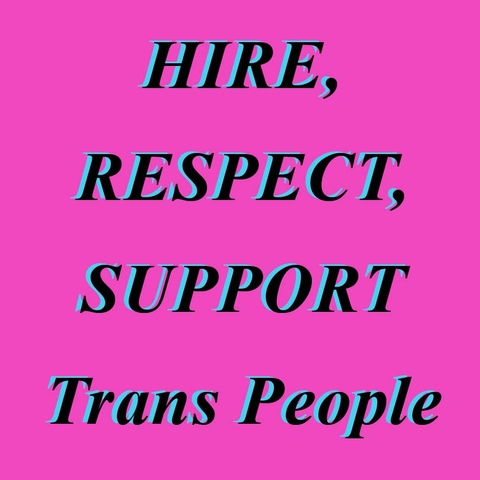 After being out of work for almost six months, I’ve finally landed myself a job. The weird thing is that after six months of little response, I got three job offers in a single week!

These offers put me in the strange position of being picky about the job I took based on salary, benefits, as well as the “intangibles” like job quality, commute, work environment. After being conflicted about which job I wanted and getting pressured by the companies to make a decision on which one, I finally decided on the job I wanted.

In the end, the key factor was not the benefits, the commute, or the dress code, but about finding an environment I felt would be most accepting of me being openly transgender.

Because I like to keep some things private, I’m not going to say where I took the job. But I will say it’s still an I.T. job and working with disadvantaged people. That’s one reason I think I felt comfortable with taking this job. They had a disposition towards having to be open-minded to differences with people.

Since I transitioned, one of the most emotionally difficult things I have had to face is job hunting and job security. It’s pretty safe to say that Oklahoma is not the most accepting to diversity, and so when I was going about my most recent job hunt, I straight up told some of those hiring firms that I preferred not working in culturally conservative industries like oil and gas. Not my crowd. Not just because I’m trans, but politically and socially.

The problem with my insecurity is I don’t have stereotypically transwoman interests like fashion, hair or makeup. I didn’t think I could fall back on those jobs, and I’m way too fat and old to do sex work, which is another drastic fallback.

While I work in I.T., it’s not all California liberal in that field as a guarantee, especially when you’re not working for a tech company, but as I.T. support for a company. While none of the jobs I was offered (as far as I know) have a written diversity policy that includes transgender people.

The one I went with has a diversity policy for sexual orientation. I did make it a point to mention in the interviews to test the waters, that I write for The Gayly as well as another national level LGBTQ website. When I brought this up in the interview at the place I went with, the two people from the company didn’t bat an eye, which made me feel positive.

Later, when I went in to do hiring paperwork, the CEO of the place came out to introduce herself. When she saw I was from Mississippi made small talk about it and said in that “I have to say this but don’t want to offend you,” way that she couldn’t raise her kid in Mississippi, and I threw in, “Yeah, it’s a little backward.”

One could assume that her kid is gay, or one could go with the more reasonable conclusion that she’s just socially progressive.

I’m ultimately lucky though in that I have found a good job that fits my skill set, and I can build a future at, but a lot of transgender folks don’t have that luxury. I was only half joking about falling back on sex work because sadly, it becomes the only choice for a lot of trans people.

Trans people are one of the most underemployed minorities in the country because there are no Federal job protections for us, and half the states, including Oklahoma, have none either.

Having a job and a steady income is a massive relief on the stresses of being transgender, and I really do have to consider myself lucky to have done as well as I have. Far too many of us have lost jobs and can’t find meaningful or self-supporting work because of prejudices and bigotry.