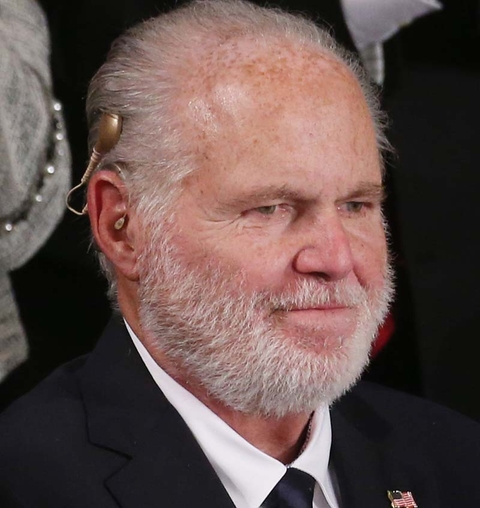 This week lawmakers in Iowa are debating whether a teacher can say "Pete Buttigieg is gay" in the classroom without first notifying parents.

I wish I were kidding but I am not.

The bill, which was introduced by 13 Republicans and advanced to the full House Education Committee on Monday, would require that lessons touching on the topic of sexual orientation or gender identity first be approved by parents, who would then have the option of sending a note to the principal excusing their children from class.

Rep. Sandy Salmon, R-Janesville, one of the bill's sponsors, reportedly was not clear whether mentioning in, say, a government class that Buttigieg has a husband would require permission (it "might," she said).

It's the kind of story that supports the uncomfortable truth Rush Limbaugh spoke of during a homophobic rant he delivered on his radio show Wednesday, a week after Melania Trump hung a Presidential Medal of Freedom around his neck. Limbaugh mused about the discomfort some voters would experience watching Buttigieg kiss his husband on the debate stage, especially if he's standing next to, as he put it, "Mr. Man, Donald Trump."

As offensive as Limbaugh's remarks about Buttigieg were (and as ironic as his holding up Trump as the epitome of manliness were, considering it was the gay dude who volunteered to fight for this country and the straight one who pleaded "bone spurs"), the reality is homophobia is not theoretical.

As the lawmakers in Iowa are showing, it is actively practiced.

There will be people who will see Trump's many alleged infidelities (which he denies) as well as his well-documented bullying as quintessential masculine behavior and will dismiss Buttigieg's levelheadedness and affection toward his husband as effeminate.

And because homophobia is ultimately an extension of misogyny — that is, to be female is to be less than a man — some of the same prejudices that women seeking the highest office face also plague Buttigieg.

That doesn't mean fair-minded people should placate homophobes, misogynists and or racists to win an election — although that does happen. It only means that when a loudmouth like Limbaugh spews his vitriol, people should not be surprised. Remember, he would not be a millionaire if a significant number of people didn't agree with him.

So, the question isn't whether or not we should chastise the blowhard messenger, it's what are we doing to challenge the hateful message?

Buttigieg is not the first openly gay person elected as mayor in this country. No, that would be my friend Neil Giuliano, who was elected mayor of Tempe, Arizona, in 1994 and came out in 1996. A recall effort to remove him was immediately activated but didn't reach the ballot.

However, the second attempt did, and you know who stood up to the homophobes in his ultra-conservative state? The late Sen. John McCain, who later said: "he was a hard-working public servant and someone I have great respect for." Giuliano won reelection easily ... but the homophobes did not go away.

Prejudice did not go away.

The people who listen to Limbaugh did not and will not go away.

This is not meant to conflate supporting Buttigieg with fair-mindedness. Only to remove who he loves off the list of reasons to not vote for him.

Limbaugh recently revealed he was diagnosed with advanced lung cancer. He may survive it. He may not. But one thing for sure is the attitudes of those who delight in his hateful speech will remain.

So be mad at Limbaugh all you want. Just know there is a difference between how things are and how things should be. The bridge between the two is not constructed from denial and despair but rather an acknowledgement of the enemy — in this case, it's prejudice — and a determination not to allow it to prevail.

Editor's note: LZ Granderson is a journalist and political analyst. He was a fellow at the Institute of Politics at the University of Chicago and the Hechinger Institute at Columbia University. He is the sports and culture columnist for the Los Angeles Times and co-host of ESPN LA 710's "Mornings With Keyshawn, LZ and Travis." Follow him on Twitter and Instagram @lzgranderson. The opinions expressed in this commentary are solely those of the author.