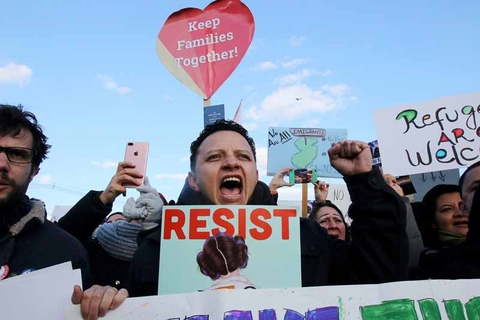 President Donald Trump on Monday denied his immigration order was to blame for the chaos at the nation's airports over the weekend. AP photo by Thomas E. Franklin.

WASHINGTON (AP) — President Donald Trump on Monday denied his immigration order was to blame for the chaos at the nation's airports over the weekend, instead pointing to computer glitches, protesters and even the "tears of Senator Schumer."

Later he shifted the focus away from the weekend's immigration turmoil, signing an executive action aimed at cutting regulations for small businesses. White House officials called the directive a "one in, two out" plan, requiring government agencies requesting a new regulation to identify two others they will cut.

Trump signed the order in the Oval Office surrounded by small business leaders, saying it would "massively" cut regulations and calling it the "biggest such act that our country has ever seen."

Trump's business announcement came as protests continued around the country over his immigration order. Early Monday, he took to Twitter to defend the move, saying that only 109 out of 325,000 people "were detained and held for questioning." Trump also said swift action was important, noting that there are a "lot of bad 'dudes' out there."

Top Trump aides also defended the order, comparing it to a 2011 policy on Iraqi refugees. In 2011, President Barack Obama imposed additional checks on Iraqi refugees after two Iraqis were charged with terrorism offenses in Kentucky.

In an interview Monday on ABC's "Good Morning America," Trump aide Kellyanne Conway wrongly claimed that the 2011 policy "was never covered in the press." She also falsely described it as Obama's own "ban" on refugees.

The 2011 policy was reported by several media outlets, including The Associated Press. Unlike Trump's order that imposed a 90-day ban on people from seven Muslim-majority countries, the Obama policy applied only to Iraqi refugees and never specifically prohibited entry.

Trump also announced he will reveal his pick for the Supreme Court at 8 p.m. Tuesday. The court has had eight justices since the death last year of Justice Antonin Scalia. Obama nominated Merrick Garland for the post, but Senate Republican leader Mitch McConnell refused to take up the nomination.

Responding to criticism that his sudden immigration action caused unnecessary chaos at airports in the U.S. and abroad, Trump tweeted Monday that "If the ban were announced with a one week notice, the 'bad' would rush into our country during that week."

Trump enters his second week in office amid a global backlash to his policies. European Union officials denounced his immigration order as a dangerous embrace of isolationism and inequality, while the international aid group Doctors Without Borders accused Trump of keeping people "trapped in war zones, directly endangering their lives."

In Iraq, two lawmakers said the Iraqi parliament has approved a "reciprocity measure" restricting the entry of Americans into Iraq.

Meanwhile, Trump's order does not address homegrown extremists already in America, a primary concern of federal law enforcement officials. And the list of countries in Trump's order doesn't include Saudi Arabia, where most of the Sept. 11 hijackers were from.

"Big problems at airports were caused by Delta computer outage, protesters and the tears of Senator Schumer," Trump tweeted.

He was referring to a Delta systems outage Sunday night that led to departure delays and cancellations of at least 150 flights. However, the chaos started Saturday as protesters packed some of the country's major airports to demonstrate against the executive order.

Democratic Sen. Chuck Schumer tweeted Friday that "Tears are running down the cheeks of the Statue of Liberty" over the ban.

Trump has defended his order by saying it's not a "Muslim ban."

A number of U.S. diplomats prepared a memo criticizing the temporary travel ban.

In a "dissent cable," being drafted for State Department leadership, the diplomats say the ban will not make the U.S. safe, runs counter to American values and will fuel anti-American sentiment around the world. They say the ban won't produce a drop in terror attacks in the U.S., but instead "a drop in international good will toward Americans."

There appeared to be widespread confusion among authorities tasked with carrying out the order and how it would be applied to certain groups, such as U.S. legal permanent residents.

Homeland Security Secretary John Kelly issued a statement Sunday saying that, absent information indicating a serious threat to public safety and welfare, residency would be a "dispositive factor in our case-by-case determination." That means citizens of the seven countries who hold permanent U.S. residency "green cards" will not be barred from re-entering the U.S., as officials had previously said. It remains unclear what kind of additional screening they will now face.

"You have an extreme vetting proposal that didn't get the vetting it should have had," said Ohio Sen. Rob Portman, who urged the new president to "slow down" and work with lawmakers on how best to tighten screening for foreigners who enter the United States.

White House press secretary Sean Spicer on Monday morning defended the closed-mouth discussions that preceded Friday's announcement, saying that "I think there are some people who might not like the way it was done, but they were all consulted in the process."

A federal judge in New York has issued an emergency order temporarily barring the U.S. from deporting people from the seven nations subject to Trump's 90-day travel ban.

The order barred U.S. border agents from removing anyone who arrived in the U.S. with a valid visa from Iraq, Syria, Iran, Sudan, Libya, Somalia and Yemen. It also covered anyone with an approved refugee application.

The Department of Homeland Security said Sunday the court ruling would not affect the overall implementation of the White House order.

Several Democrats in Congress said they would be introducing legislation to stop the ban.