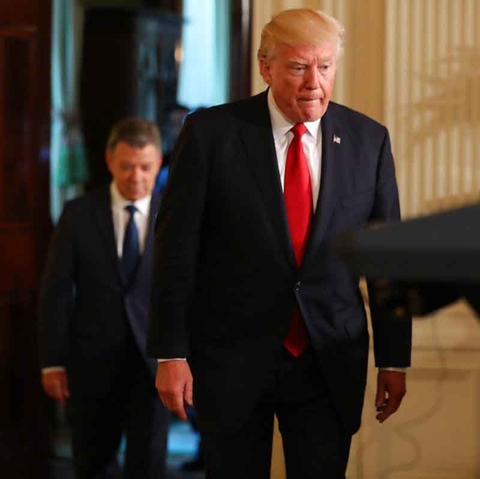 Washington (AP) — President Donald Trump's maiden international trip, a five-stop marathon across the Middle East and Europe, has long loomed as a crucial first test abroad for the chaos-courting president.

That was before he fired his FBI director — and the chain reaction of scandal that followed.

Now, with the eyes of the world upon him, the president will embark on his big trip carrying the baggage of dire troubles at home. As he tries to calm allies worried about his "America First" message, he'll be followed by fallout from his firing of FBI Director James Comey and the appointment of a special counsel to probe the president's campaign ties with Russia.

"There has never been a president taking his first international trip being dogged by scandal like this," said Larry Sabato, head of the University of Virginia Center for Politics. "He's already a president viewed skeptically by much of the world. And while the pictures from the trip may be great, the White House can't change the headlines that will follow him wherever he goes."

Trump's trip was always going to be dramatic. U.S. allies have been rattled by his warnings about pulling back from the world. He is tasked with urging a united front against terror by appealing to some of the same corners of the Muslim world he has tried to keep out of the United States with his travel ban. Last week, he added new layers of complication by disclosing classified intelligence to a longtime adversary.

Still, the White House once hoped the trip, wrapped in the pomp and circumstance of diplomatic protocol, could offer a chance at a reset after a tumultuous first four months in office. Trump's advisers saw it as an opportunity for the United States to boldly reassert itself on the world stage and resume a leadership role that the administration believes was abdicated by President Barack Obama. Trump's powerful senior adviser, his son-in-law Jared Kushner, led a West Wing team to craft the agenda, laden with religious symbolism.

Still, Trump hasn't been eager to seize the opportunity. It's been more than a half-century since any president waited as long to take his first foreign trip. The itinerary, which begins Saturday in Saudi Arabia, is a startlingly ambitious excursion for a president who dislikes travel and has displayed a shaky grasp of foreign affairs.

He tweeted Friday morning: "Getting ready for my big foreign trip. Will be strongly protecting American interests - that's what I like to do!"

Each stop comes with high stakes.

In Saudi Arabia, the president — whose campaign was marked by heated anti-Muslim rhetoric and whose administration has tried to enact a travel ban from several Muslim-majority countries — will deliver a speech to the Islamic world meant to be a clear contrast with the vision Obama laid out in his first trip to the region.

In Israel, Trump will meet with Israel Prime Minister Benjamin Netanyahu, looking to smooth over fresh tensions. Israel was in an uproar earlier this week after U.S. officials confirmed Trump shared highly classified intelligence about the Islamic State group with senior Russian officials visiting the White House. The information, about an IS threat related to the use of laptops on aircraft, came from Israel and there were concerns a valuable Israeli asset could be in danger, a U.S. official said, requesting anonymity to discuss the sensitive material.

National Security Adviser H.R. McMaster added to the alarm by refusing to declare the Western Wall a part of Israel. U.S. policy holds that ownership of the holiest site where Jews can pray, as with the rest of Jerusalem, is subject to Israeli-Palestinian negotiation.

In Rome, the president will call upon Pope Francis, the popular, liberal-minded pontiff. Trump denounced Francis during the campaign, calling him "disgraceful" for questioning his faith.

In Brussels, Trump will attend a meeting of NATO, the World War II-era alliance which Trump has repeatedly mused about abandoning because member states weren't paying their fair share. He recently has shifted to reassure wary allies that he remains committed to the pact.

And in Sicily, the president will meet with the other leaders of the G7, a gathering of Western economic powers. Key parts of the group are unsettled by Trump's unpredictability and his willingness to cheer on nationalist sentiment.

Trump's itinerary is heavy with religious symbolism. He'll visit the birthplace of Islam, the Jewish homeland and the Vatican. Officials say the message is "unity."

"He strongly believes that it is the strength of the faith of people in these religions that will stand up and ultimately be victorious over these forces of terrorism," Secretary of State Rex Tillerson said.

Administration officials believe the unexpected move of going to Saudi Arabia first was meant to underscore the seriousness of the United States' commitment to fighting extremist groups like the Islamic State. Trump, whose denunciations of Iran have been welcomed by the Saudis, wants to frame the conflict not as one between the West and Islam, but simply between good and evil, according to his aides.

While some Middle East leaders will likely greet Trump warmly, he could receive a far cooler reception in Europe. Though Pope Francis has said he'd "never make a judgment about a person without hearing him out," others on the continent have sharply criticized Trump. That includes France's newly elected President Emmanuel Macron, who denounced Trump's musings on abandoning the Paris climate treaty, a likely point of contention in Sicily.

Trump's inauguration sparked thousands of protesters to fill the streets of several European capitals, chaotic scenes that could be repeated during his stops in Rome, Brussels and Sicily.

"Welcome to the White House abroad," said Ari Fleischer, President George W. Bush's former press secretary. "This is a great opportunity for the president to change the subject, to make real news. But the downside is that it could be dominated by domestic-style questions. ... Every first trip is over-scrutinized. The whole world is watching."