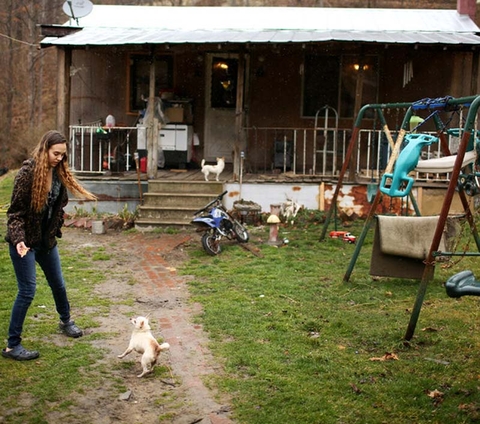 Data shows that poverty is widespread in the Appalachia region where many GOP states are located..

ANALYSIS
by Zachary B. Wolf

There are plenty of problems in places President Donald Trump visits for his campaign rallies, but he's more likely to talk about how beautiful they are.

That included Cincinnati, which Trump described during a stop this week as "on the banks of the beautiful Ohio River, with the hardworking patriots of the American heartland."

Compare that description with his attacks on Baltimore spotlighting poverty and urban decay. The majority-black city, the President said this week, is a "disgusting, rat and rodent infested mess" and "no human being would want to live there."

The difference? Baltimore is home to Democratic Rep. Elijah Cummings, chairman of the House Oversight Committee. In Trump's worldview, people who are opposed to his policies are bad. And people who like him are good. It's a simple, binary equation for him.

The problem with that is the US is a massive, complicated place and Trump is supposed to be leading all of it.

He's not going after his political ally Senate Majority Leader Mitch McConnell, a Kentucky Republican, even though Kentucky has some of the poorest areas in the country. Instead, Trump is promising to do things like bring back coal mining jobs, even as the energy industry moves toward gas and solar power. That will not comfort former Kentucky employees of the bankrupt Blackjewel coal company, which declined to pay some workers' final paychecks.

In Cincinnati, Trump had a mostly white audience cheering at the decay of mostly black inner cities. He segued quickly from his praise for Ohioans into an argument that Democratic politicians who run major cities have failed, saying that "no one has paid a higher price for the far-left destructive agendas than Americans living in our inner cities."

It's true that most major cities are run by Democrats. But Trump's message about Baltimore and other inner cities, delivered, as it was, to a MAGA-hat-wearing audience in Cincinnati, came off as a political potshot rather than a constructive effort.

While there was outrage at Trump's attack on Baltimore and its racial subtext, there were also a number of thoughtful examinations of why the situation in inner-city Baltimore has not improved. One disturbing fact is that urban areas, for the first time in years, see more fatal drug overdoses than rural areas, according to a new analysis of statistics from the Centers for Disease Control and Prevention.

The issue of inequality in urban areas has fueled much of the political conversation among Democrats in 2020. And the social programs many of the progressive Democrats are proposing -- help with health care, child care and college -- would help the black community, which has a lower median income than other racial subgroups in the US and far less generational wealth to fall back on.

Trump's efforts meant to help urban areas have at times helped his political allies. ProPublica reported on a tax break meant to spur investment in places like inner-city Baltimore that was exploited by Under Armour CEO Kevin Plank and Goldman Sachs to help develop an area of the city that is not particularly poor.

CNN's Lydia DePillis has written about how that Opportunity Zone tax break has been used in cities around the country to save real estate investors money for high-end projects rather than for affordable housing.

Poverty in the US

Of the 10 states with the highest poverty rates, according to census data, all but one -- New Mexico -- voted for Trump. They are Mississippi, Louisiana, West Virginia, Kentucky, Alabama, Arkansas, Oklahoma, South Carolina and Tennessee.

The area of the country with the lowest poverty rate is the Northeast, which was united, except for one electoral vote in Maine, against Trump.

The area of the country with the highest poverty rate is the South, which is Trump's most reliable bed of support.

The poverty rate can be misleading, however. It's a single threshold set by the federal government's Census Bureau for the entire country. In 2018, the poverty threshold was set at an annual income of $13,064 for a single person and $25,465 for a family of four with two children.

But it's a misleading number in a lot of ways, since it costs a lot less to live in Mississippi or West Virginia than it does in Baltimore.

According to the Massachusetts Institute of Technology's Living Wage Calculator, it costs about $48,000 for a family of four with one working adult to live in West Virginia, compared with almost $60,000 in Baltimore. But the poverty level, according to the government, is the same. This is also why Democratic efforts to raise the minimum wage to $15 would have a different effect in the South than in large cities, where it still might not be enough.

The number of Americans living in poverty has been falling since 2014, according to the Census Bureau, when it released data for 2017. Data for 2018 will be released in September.

For another example of how poverty data doesn't tell the whole story, consider this: The state with the second-lowest poverty rate in the US is Maryland, which includes Baltimore.