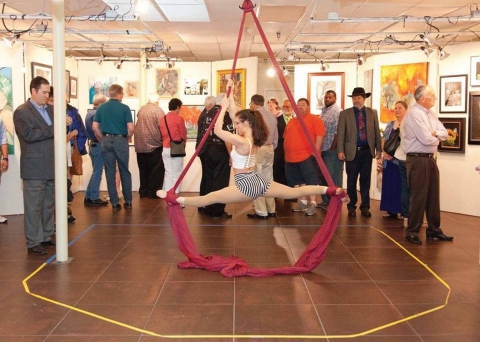 Oklahomans for Equality’s annual MOREcolor Art Exhibition is Oklahoma’s oldest and largest juried art show. “We want it to be the most artist friendly, cutting edge show in the area. For art that isn’t available in other venues, we are here,” says outgoing MOREcolor chair Allie Jensen.

Jensen, and OkEq’s Program Director Jose Vega, are working together on this year’s show, which they expect will be the largest show since its inception in the 1980s.

The show is a large undertaking. Last year MOREcolor exhibited 165 individual pieces, representing 56 artists. More than twice that number of works was submitted. “Each artist is allowed to submit up to five pieces online,” said Jensen.

After the deadline, the jury, consisting of the primary judge and four other people, gets together. Each piece is scored by each juror, and averaged. “It turns into a very objective and fair process. It takes the politics and friendships out of it,” she said.

The MOREcolor show is accepting of works that might not be accepted in other shows. Jensen says, “I think our scope is wider, we welcome more challenging work.

“Everything is for sale. The commission is 30 percent, it’s really reasonable.” That benefits the artists. "We try to make sure we break even,” she said, but it usually generates some money for OkEq.

The opening on June 9, 6 p.m. to 9 p.m., is free and open to the public. Cash awards include the Juror’s Prize and People’s Choice Award. The opening event includes unique entertainment, catered cuisine and cash bar, and is held in the event center at the Dennis R. Neill Equality Center, 621 East 4th Street in downtown Tulsa, Oklahoma.

Vega described this year’s opening reception entertainment. “We will have Ballet Folklorico Sol Azteca,” he said. Sol Azteca is a Tulsa community group that “performs traditional Latin dances, featuring dances from every state in Mexico.”

“In addition, Tulsan Robbie Dee Ewens will be our violinist. She is a local artist in Tulsa.” Ewens is originally from Leicester, United Kingdom, and studied violin at London Music.

Jensen said that catering for the reception is by TW’s A-Fab Catering. “It’s a really nice spread…it’s always fun,” she said.

In addition to the artwork on display at the opening reception, the entertainment, and great food from the caterer, a cash bar will be available.

The show runs June 9 through 12, and is presented as part of Tulsa’s LGBTQ Pride celebration. MOREcolor is presented in June instead of OkEq’s monthly First Thursday exhibition and reception. A smaller show, featuring representative works from the full show, will be displayed the rest of June at the Equality Center.

The four-day exhibition is part of the Tulsa Pride celebration, with support from the Hyatt Regency Hotel and TW’s A-Fab Catering. The MOREcolor Art Exhibition is June 9 through 12, at OkEq’s Dennis R. Neill Equality Center, 621 E. 4th Street, in downtown Tulsa. Hours are Noon to 9 p.m. Monday through Saturday, and Noon – 6 p.m. on Sunday.