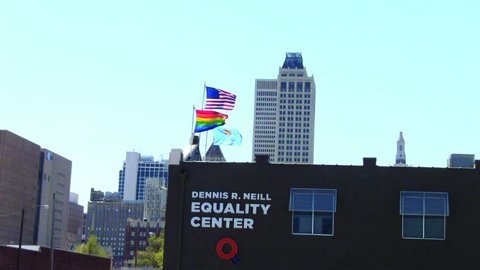 Even before Bohemian Rhapsody, the movie about the rock band Queen and its leader, Freddie Mercury, hit the theaters, our staff had already chosen as the 2019 Equality Gala’s theme “Champions: We’ll Keep On Fighting Till The End.” And it all started at the Tulsa State Fair.

Oklahomans for Equality had a booth at the fair. Thousands of people visited our booth; it was almost like a mini-Equality Center except we went to the community instead of them coming to us. I was overwhelmed with the response from individuals from rural Oklahoma visiting the fair and finding our booth mixed among the other vendors, rides and exhibits.

One afternoon, a group of youths from Muskogee came by. They loved the rainbow flags, the LGBTQ+ identity merchandise, and the information our volunteers and staff provided.

One student in particular connected with us and kept visiting the booth throughout the fair. He told us that although his mother knew he was gay, his father would never accept him, and he could not be out at school. In fact, he spent so much time in our booth that he started helping fold t-shirts and keeping the merchandise organized.

On one of his visits, he burst into tears, saying the only place he could be himself was in our 10-foot by 10-foot booth at the Tulsa State Fair. I made the young man a promise – that we would help him change the situation in his hometown so that he could be out, safe and accepted.

Two months later, on December 6, we celebrated with LGBTQ+ people and their straight allies, including moms and dads, as we established Oklahomans for Equality-Muskogee, our first chapter in that city.

Oklahomans for Equality will keep “fighting till the end” to secure full equality for all Oklahomans, and we are helping this young man – as well as other LGBTQ+ people across the state – to become Champions for Equality.

Will you become an Equality Champion?

The Equality Gala is April 27 this year; our 39th year.

Toby Jenkins is the Executive Director for Oklahomans for Equality (OkEq), an organization which seeks equal rights for lesbian, gay, bisexual and transgender (LGBT+) individuals and families through advocacy, education, programs, alliances and the operation of the Dennis R. Neill Equality Center. www.okeq.org.