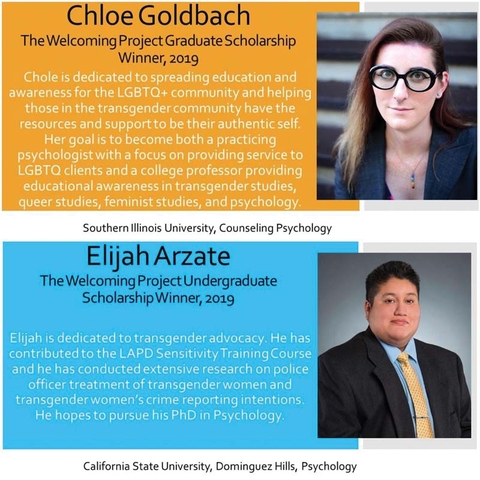 “This is the eighth year we will be giving out scholarships to LGBTQ activists,” said President and Creator of The Welcoming Project, Inc., Meredith Worthen, Ph.D. “The scholarships are awarded for LGBTQ activism (broadly defined). Students need only be enrolled in a degree-granting tuition-based institution in Fall 2019 to be eligible for the scholarship, either undergraduate or graduate.”

The first two TWP scholarships were given out in 2013. Past winners’ activism has included fighting for marriage equality, organizing LGBTQ+ clubs, being involved in social justice, trans issues, fighting against discriminatory policies for the LGBTQ+ community, prevention and education of HIV and AIDS among other LGBTQ+ causes and issues.

“The scholarship program is designed to help LGBTQ activists and support their scholarly work,” Worthen said. “We encourage applications from all student LGBTQ activists. We want to support your work!”

Over the years, TWP has received applications from LGBTQ+ activists attending universities across the nation. Others have come from as far as the United Kingdom (Nottinghamshire) and Russia (St. Petersburg).

“We are impressed with the caliber of students around the world who are dedicated to LGBTQ activism and proud to continue to offer these scholarships to support their work,” said Worthen.

TWP is a non-profit organization that began in 2011 to encourage businesses, health care/service providers, organizations, and congregations in Norman, OK, to display welcoming signs. These signs were to make LGBTQ (lesbian, gay, bisexual, transgender and queer) individuals and allies feel welcomed as patrons.

Currently, TWP is available and represented in communities throughout the United States and across the globe.

“The scholarship program was inspired by my sister-in-law, Laura Adams, who suggested that in addition to our work with providing free ‘All Are Welcome’ rainbow signs to Welcoming places all over the world, The Welcoming Project can also give back to other local LGBTQ activist projects,” Worthen added. “Once we received enough donations to support the scholarship program, we launched it in 2013.”

Applicants must be enrolled in degree-granting institutions in August of 2019 and provide an outstanding contribution to LGBTQ activism. The application deadline is March 1.

To apply, search scholarship at www.thewelcomingproject.org.

TWP is also seeking donations in any amount to support the scholarship program. All donations are tax-deductible to this nonprofit organization. Visit www.thewelcomingproject.org and search “donate.”