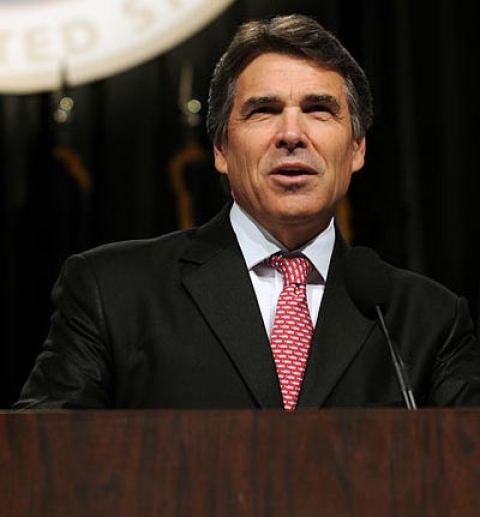 Gov. Rick Perry of Texas. In a speech Saturday to Boy Scouts he urged the organization to maintain its anti-gay policy. Photo by Jim Greenhill.

Will Weissert, Associated Press
AUSTIN, Texas (AP) — Gov. Rick Perry said emphatically Saturday that the Boy Scouts of America shouldn't soften its strict no-gays membership policy, and suggested that bending the organization to the whims of popular culture is wrong.

Perry is an Eagle Scout and in 2008 he authored the book "On My Honor: Why the American Values of the Boy Scouts Are Worth Fighting For." It detailed the governor's deep love for the organization and explained why it should continue to embrace traditional, conservative values — including excluding openly gay members and scout leaders.

America's longest-serving governor addressed the Texas Scouts' 64th annual Report to State, where hundreds of Scouts from around Texas filled the state House of Representatives to announce their delegation's recent accomplishments.

Perry has addressed the gathering several times before, most recently in 2010, but not since the announcement the Scouts national leadership is mulling scraping the mandatory exclusion of gay members. Instead, the group could allow different religious and civic groups that sponsor Scout units to decide for themselves how to address the issue — either maintaining the exclusion or opening up their membership.

Even though the Boy Scouts reaffirmed the no-gays policy just seven months ago, the proposal is expected to be discussed, and possibly voted on, at the meeting of the Scouts' national executive board, which begins Monday in Irving, outside Dallas.

Perry told the youngsters that the Scouts was a key reason he joined the U.S. Air Force and later sought public office, and that society's failure to adhere to the organization's core values was a cause for high rates of teen pregnancy and wayward youth who grow up to be "men joining their fathers in prison."

Speaking to reporters afterward, Perry said: "Hopefully the board will follow their historic position of keeping the Scouts strongly supportive of the values that make scouting this very important and impactful organization."

"I think most people see absolutely no reason to change the position and neither do I," Perry said. He added that his views on the subject have not changed since writing his book, in which he noted that profits would be donated to the Boy Scouts of America Legal Defense since "they continue to be under attack from the forces of secularism."

Asked if he would feel different if the Scouts' policy changes, Perry said he wouldn't speculate on what the organization might decide do. But he said: "to have popular culture impact 100 years of their standards is inappropriate."

He also disagreed that allowing members of all sexual preferences would make the Scouts more tolerant: "I think you get tolerance and diversity every day in Scouting."

Perry wrote in his book that he doesn't "believe the teaching of sexual preference fits within the parameters of Scouting's mission," but also made it very clear he'd like to keep gay members from joining.

"Because gay activism is central to their lives, it would unavoidably be a topic of conversation within a Scout troop. This would distract from the mission of Scouting: character building, not sex education" he wrote.

Perry also questioned whether sexual preference is determined at birth or is a matter of personal preference in his book, and wrote that he doesn't believe in "condemning homosexuals that I know personally."

"The radical homosexual movement seeks societal normalization of their sexual activity," he wrote. "I respect their right to engage in the individual behavior of their choosing, but they must respect the rights of millions in society to refuse to normalize their behavior."