US senator, all US House members expected on Oklahoma ballot 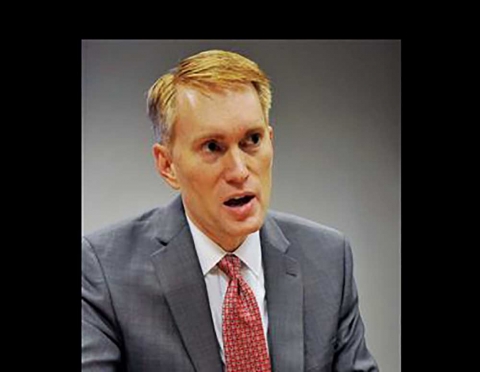 OKLAHOMA CITY (AP) — U.S. Sen. James Lankford and all five of Oklahoma's Republican U.S. House incumbents are expected to formally say during a three-day candidate filing period that begins Wednesday that they will seek to keep their seats.

The only statewide elected Oklahoma office up for grabs in November is a six-year term on the Oklahoma Corporation Commission, a three-member panel that regulates industries including oil and gas, transportation and utilities. In that race, longtime Democratic state Rep. Richard Morrissette of Oklahoma City is challenging incumbent Republican Dana Murphy.

Also on the ballot will be all 101 seats in the Oklahoma House and more than half the districts in the 48-member state Senate.

Republicans currently enjoy a 71-30 advantage over Democrats in the House and a 39-9 margin in the Senate, but Democrats are hoping to capitalize on a growing frustration among the education community in Oklahoma over GOP-backed initiatives and declining per-pupil funding from the Legislature.

Angela Clark Little, the mother of two fourth-grade students in Edmond, said a pro-education Facebook group she formed with a teacher friend grew by more than 12,000 people over the last month, and now more than two dozen teachers or retired educators have told her they plan to run for state House or Senate. Little says most are frustrated by the Legislature's tinkering with education policy and support of policies like vouchers that they fear will siphon money from public schools to private ones.

"People are finally mad. They're finally angry, and they need to be," Little said.

Little said the roughly 30 candidates who have reached out to her include mostly Democrats, but also Republicans. She said the group, Oklahoma Parents and Educators for Public Education, also is forming a political action committee and plans to start raising money.

While Democrats have won two heavily Republican districts with pro-education candidates during special elections in the last year, that kind of success will be more challenging in a high-turnout general election, said Pat McFerron, a longtime GOP strategist and pollster.

"In the general election, it will be difficult for individual candidates to overcome the basic nature of the seat," McFerron said. "Even if you were to say it's the year of the educator, which I'm not willing to concede by any stretch ... the presidential turnout makes a general election very tough sledding for Democrats in the state."

By Sean Murphy. Copyright 2016 The Associated Press. All rights reserved.
This material may not be published, broadcast, rewritten or redistributed.