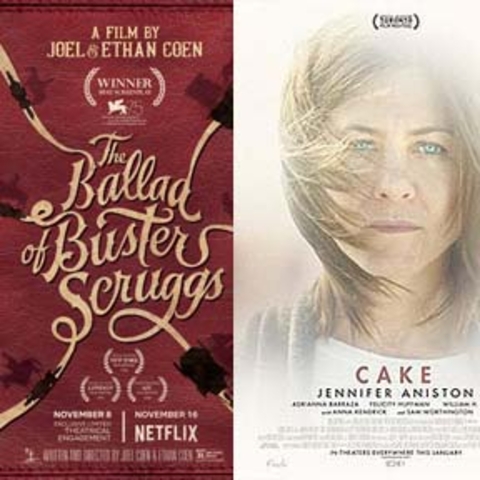 The Ballad of Buster Scruggs:  I have loved Coen Brothers films since Raising Arizona dazzled me in the late '80s. The addition of this anthology to their oeuvre via Netflix is worthy.

It is six tales of the Wild West that unfold sort of like Black Mirror donning a ten-gallon hat. The cinematography is perfect, and the talky dialogue has that stilt to it which the Coens used so well in True Grit.

Perhaps the most outright hilarious tale is the opener featuring Oklahoma's own Tim Blake Nelson as the gap-toothed balladeer bad boy in white, Buster Scruggs, merrily strewing bodies behind him.

Coen humor is most usually dark and goofy, and they don't disappoint on that count in any of the stories here. But one character that jauntily stalks all the tales is the Grim Reaper putting notches on his pistol handle at any moment.

They pack the tales with the conventions, icons, and ornaments of The Western until it is brimming. The casting is inspired by the likes of James Franco, Tom Waits, Liam Neeson, Zoe Kazan and many more.

The twists and turns of the sometimes-morbid tales can be as bumpy as a stagecoach ride over darkly dusty roads, but their foray into the freaky frontier will have you uncontrollably replaying some of the scenes and images over and over in your head long after you view them.

Cake: Every time we turn around there is something on the news about opioid addiction and fatal overdose numbers along with legislators or politicians pushing stricter laws. But it always begs the question about where this leaves the multitudes of people having to wrestle and deal with chronic pain every day.

Even though this film is several years old, it tackled this issue and the complicated issue of suicide in interestingly thoughtful ways. Jennifer Aniston settled any question about her range as she portrays Claire Simmons, an injured and guilty survivor of a catastrophic accident which left her grappling with agonizing injuries and scars both physical and emotional.

Aniston seethes back pain from her harsh face with no make-up to her stiff walk to her comically acidic comments to everyone. When a woman (Anna Kendrick) in her support group commits suicide, Aniston tries to backtrack her path to that permanent decision leading to interacting with the widower (Sam Worthington) left behind.

Aniston is rather brilliant as she scuttles along struggling with painkiller supplies, grief, relief, mourning and memories. She may be financially well off, but that only goes so far with problems of this scale. The quandaries of class even enter the mix as the caring companionship of her maid (Adriana Barraza) bridges some of the depressing gulfs.