Victor Gorin to receive the Hero of Hope award 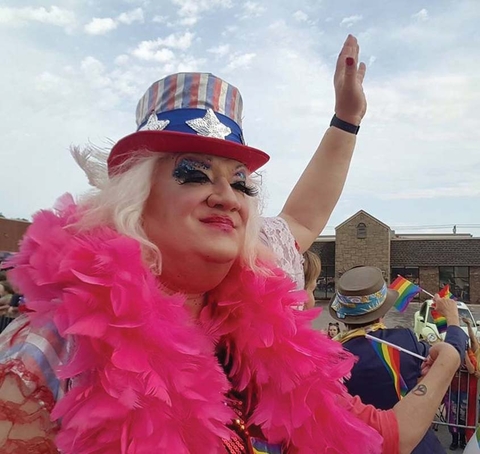 Victor Gorin (a.k.a. Victor Victrola) is the Cathedral of Hope’s “Hero of Hope” 2020. Photo provided.

Community activist Victor Gorin will be honored with OKC’s Cathedral of Hope 2020 Hero of Hope award. He has been part of the Oklahoma LGBTQ+ scene for many years, known for being a dedicated Democrat and a fierce advocate for human rights.

Cathedral of Hope is a congregation of the United Church of Christ. The church recognizes a Hero of Hope as someone who has taken courageous stands for the rights of people and especially works to change how the world thinks about LGBTQ+ people, and how people think about God; reach marginalized people, especially teens living in isolation in small towns; and redefine Christianity as an including faith rather than an excluding religion.

The Hero of Hope Award originated in the early 1990s as a way for the Cathedral of Hope to single out and honor people who have courageously taken a stand for LGBTQ rights. The Hero of Hope Award is presented in recognition of those who have taken courageous stands for the rights of all people without regard to gender, race, sexual orientation, gender identity, or gender expression.

When Gorin was told he would be honored as this year’s hero, he said, “Oh my, I didn't have a clue. This is such an honor.” His sister has been notified and is planning to attend the celebration.

Gorin moved to Oklahoma City from Stillwater in 1979. He had just come out to himself a year before then. He went to work for AT&T in 1981 starting in a clerical job but later changed to be a long-distance operator. He held that career for 16 years.

He said his first venture into the LGBT scene (besides bars) was a job selling advertising for what was then, the Gayly Oklahoman.

Gorin was well-known for being a key figure for the newspaper during those years.

“The Gayly was instrumental in coming out to my parents,” Gorin said. “When I presented The Gayly with my picture in it to them on my mom's birthday on March 2, 1984, they broke the news that although they didn't mind, they had known about my alternative lifestyle for over four years!”

He also worked at the Metro Star, the Oklahoma LGBTQ+ news source, until the paper was retired in January of 2011.

Gorin is a licensed cosmetologist having graduated from Stillwater Beauty College in 1979. He has four associate degrees from Rose State in Business, Spanish, Political Science and Criminal Justice and is currently pursuing a bachelor's degree in Criminal Justice from the University of Central Oklahoma in Edmond.

“My ambition is to help people in the correctional system adapt successfully to society as valued citizens.” He is also active in the Cathedral of Hope Prison Ministry.

“I got sidetracked for a while with a jukebox business called Victorola's Music, which I did from 1987-1993,” Gorin said. “Among the businesses I served was the Hilo, and the Porthole when it was a lesbian bar in the day of 45 rpm jukeboxes.”

He also does some part-time work as a DJ.

Gorin has served in many capacities on the board of many boards and organizations. Here are just some of them: Oklahoma Gay and Lesbian Political Caucus, Oklahoma Stonewall Democrats, Oklahoma Democratic Party, Oklahoma City Pride, Oklahoma Coalition to Abolish the Death Penalty, Venice Neighborhood Association, and is a proud member of the Communications Workers of America

“I am also with the Voter Registration Committee, which registers our new citizens to vote at the monthly Naturalization Ceremonies in Oklahoma City. I have also worked with other voter registration projects,” Gorin said. “And I am an Inspector with the Oklahoma County Election Board, working a precinct with them from 1994-1996 and 2000 to the present.”

Gorin will receive the Hero of Hope award on February 16 at 6 p.m. at Cathedral of Hope, located at 3131 N. Pennsylvania Avenue in Oklahoma City.