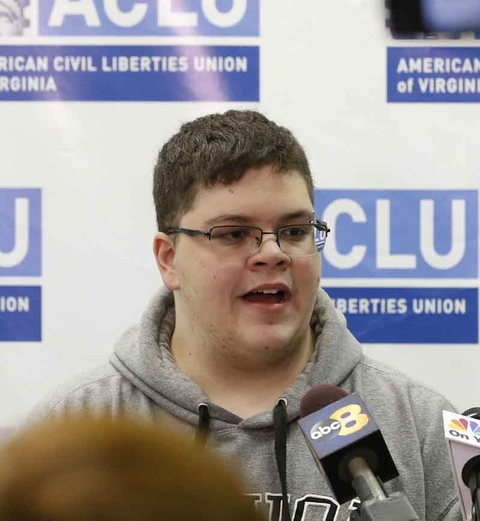 Richmond, Va. (AP) — A Virginia school board on Friday asked a federal judge to dismiss a lawsuit filed by a transgender teen who sued for the right to use the boys bathroom at his high school.

Gavin Grimm sued the Gloucester County School Board in 2015. The 4th U.S. Circuit Court of Appeals sent the case back to a lower court last month, asking a judge to decide whether it's now moot because Grimm graduated in June.

In its motion Friday, the school board reiterated earlier arguments it has made, saying the school's restroom policy didn't violate Grimm's constitutional rights or discriminate against him. Under the policy, students must either use restrooms and locker room facilities that match their physiology or three private, single-stall bathrooms.

"Under the School Board's restroom policy, Grimm was treated like every other student in the Gloucester Schools," wrote David Corrigan, the school board's attorney.

Grimm's lawyers with the American Civil Liberties Union have argued that barring him from using the same restrooms that other boys in the school were allowed to use discriminated against him in violation of the Equal Protection Clause of the U.S. Constitution and under Title IX, a ban on sex discrimination in federally funded educational programs.

"After everything that all the medical professionals, all the child welfare professionals said, all the personal stories of trans kids ... after hearing all that, that this school board continues to dig in its heels is disheartening," Josh Block, a staff attorney with the national ACLU's Lesbian Gay Bisexual Transgender & HIV Projects.

Grimm's lawyers have also said he is entitled to use the boys’ restroom when he attends school events as an alumnus. In its motion to dismiss, the school board said the restroom policy does not apply to alumni.

Block said that even though Grimm has graduated, the court must still decide whether Grimm's rights were violated while he was a student. The ACLU has 14 days to respond to the school board's motion.