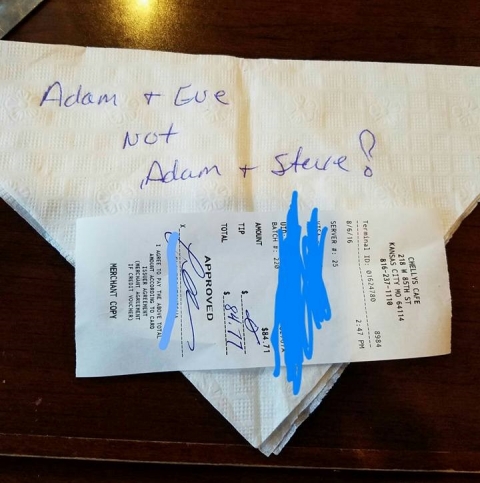 On August 6, 2016, Eddy Cabrera, a gay waiter at Chelly’s Café in Kansas City, Missouri did not receive a tip but instead received a note that said, “Adam and Eve not Adam and Steve!”

Cabrera’s friend, Jonathon Antle, posted a picture of the note left along with the receipt totaling to be around $84 without a tip. LGBTQ Nation reports that Cabrera was raised in Guatemala and he didn’t understand the note left until Antle explained it.

In the comments section of Antle’s Facebook photo, Cabrera claims he “was about to cry” when he learned was that message meant.

Cabrera also says the customers were rude and told him that his tip was on the table and left.

At 11:37 p.m., Cabrera commented on Antle’s Facebook photo with this statement:

“Thank you to all of you people that I didn't know yet in person... Today was one of those days when someone put my self and my everything down... It wasn't just her. Was her mom. And brother or bf. ... Why people hate others I was working just like a regular person. I never do nothing to thm and the mom. Say I don't want you to make my drink.s the guy was Making faces to me [...]

"I was with my friend and I wasn't getting it. At that point till they told me your tip it's on table. And left like that. So I see the ticket and there was a napkin with that message! So what you do? I ask my friend and he explained to me… And he gets mad and told me that it's okay. He took a picture of it. Bcuz I was at work busy. And he post it. On here... Thank you guys so much I was thinking I'm alone. Here. But now I see there is a different Kansas city! […] [sic]”

At 12:18 a.m., Cabrera followed up his previous statement with a screenshot of a Facebook message a woman named Nisha Martin sent to him. The Gayly believes she is one of the customers who sat at the table that gave Cabrera the anti-gay note.

“I just truly apologize for the events that went into play today, from the bottom of my heart I am so sorry. I never meant for any of this to happen honestly. Even though I’m not the one who wrote it I can’t do anything but take full responsibility for it bc my credit card was used and I was with the person who did it, my daughters God father is a homosexual I would always support the LGBT community til the day I die, I’m not sure if it’s too late to apologize I understand damage has already been done but I’m asking that you please find it in your heart to forgive me and the others I was with. I never knew that note was left until after we left…. [sic]” 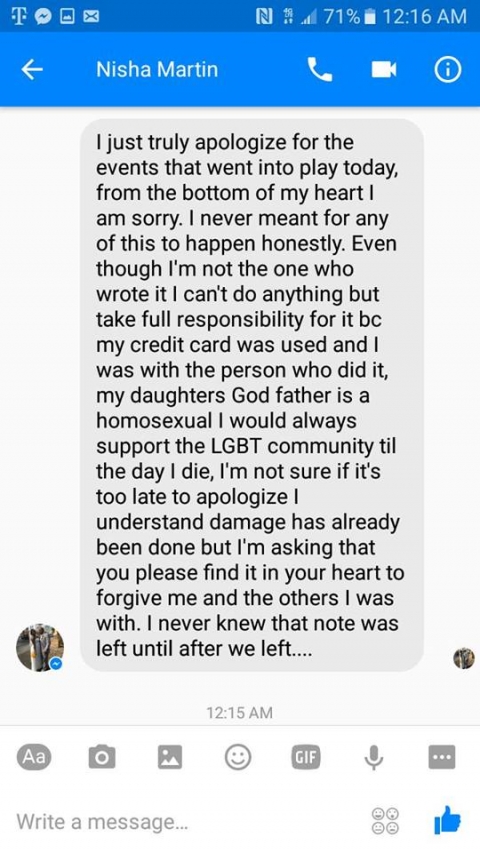 The last comment on the thread is from Cabrera. He posted a picture along with a comment that said “Thank you all for stop by and do this. For me. It means alot... Thank you. [sic]” The picture appears to be an envelope that previously contained a $20 bill and a pamphlet for the Spirit of Hope Metropolitan Community Church. 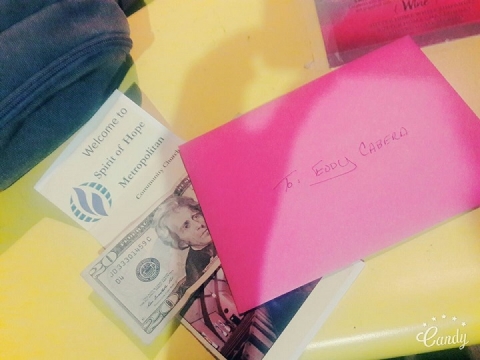 It is uncertain if the envelope was given by the person who messaged him or by someone who was feeling charitable.