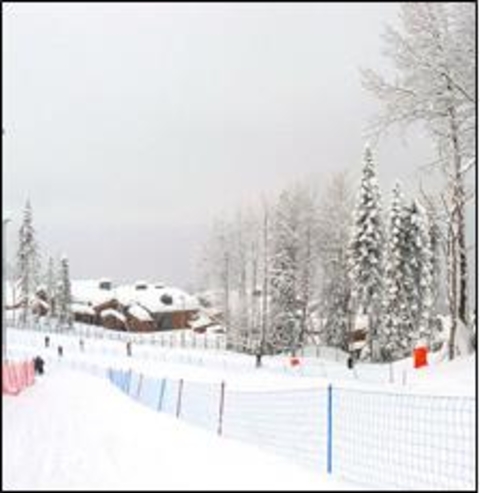 How it's supposed to look for the Olympics at Krasnaya Polyana. The weather in Sochi is expected to be 63 F on Thursday, and temperatures for the ski events are well above freezing. File photo.

Sochi, Russia (AP) — With temperatures rising on the Black Sea coast, the Sochi Olympics are starting to feel more like the Summer Games.

On Monday, these Sub-Tropical Olympics really started to heat up with temperatures soaring to 16 degrees C (61 degrees F). That led to skiers in the mountains above Sochi putting snow in their racing suits to cool down, and left ski jumpers landing in puddles.

"I'm trying to hide from the sun here because I feel like I'm getting red," said Chemmy Alcott, a British skier who competed in the super-combined race.

The weather could get even warmer by the end of the week.

Organizers said the temperature could reach 17 C (63 F) on Thursday.

But even up in Krasnaya Polyana, where the outdoor events are being held, temperatures were well above freezing.

"It was pretty warm snow and I don't think I adapted to it well," said American skier Stacey Cook, who missed a gate in the slalom leg of the super-combined. "It slides under your ski more."

At the RusSki Gorki Jumping Center, organizers canceled the first of three jumps after sunny skies and 15 C (59 F) temperatures softened the snow in the landing area. The second session was postponed after an official said the first competitor fell while landing.

When training resumed, only 38 of 55 starters made jumps in each of the two rounds.

The mountain venues are expected to return to freezing Tuesday, organizers said. But from Wednesday, warmer weather is in the forecast.

To combat the possibility of high temperatures, organizers have been storing large amounts of snow and say will they have enough to continue.