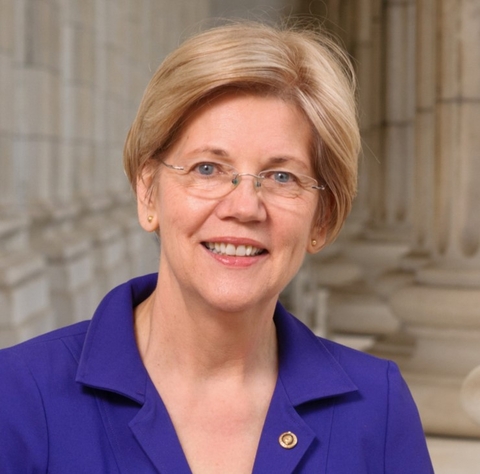 Democratic presidential candidate Elizabeth Warren is proposing a new tax on big corporations, bolstering the Massachusetts Democratic senator's progressive campaign against the powerful and wealthy ahead of the 2020 election.

The new tax would hit the 1,200 most profitable companies in the country, including Amazon, according to Warren. The tech giant is one of the most valuable companies in the world and earned a record $10 billion last year, but didn't have to pay anything in federal income taxes.

"It will make our biggest and most profitable corporations pay more and ensure that none of them can ever make billions and pay zero taxes again," Warren wrote in a post to Medium Thursday.

The proposal is designed to tap into public outrage over tax breaks offered to corporations like Amazon, which pulled out of a plan to build a new headquarters in New York City amid political backlash about the incentives state and city politicians offered to land the deal.

Under Warren's plan, corporations would have to pay an additional 7% tax on any earnings above $100 million.

Amazon would have wound up paying $698 million in taxes last year, Warren estimated.

But that low bill isn't because Amazon's evading taxes. The US system allows for a variety of deductions and for money-losing companies to reduce their future taxable income -- both tools used by the tech giant.

"Because of relentless lobbying, our corporate income tax rules are filled with so many loopholes and exemptions and deductions that even companies that tell shareholders they have made more than a billion dollars in profits can end up paying no corporate income taxes," Warren wrote.

While corporate tax reform is needed, she added, her goal is to block companies from exploiting loopholes at all. Her proposed tax would be based on the profit figure reported to investors -- including earnings made overseas -- rather than the taxable income reported to the IRS.

According to an estimate provided by the Warren campaign from economists at the University of California-Berkeley, the tax would bring in $1 trillion in revenue over the next 10 years.

Earlier this year, Warren proposed a new wealth tax on Americans with assets of more than $50 million, as well as a plan to break up tech giants like Amazon, Google and Facebook.

The latter would impose new rules on certain kinds of tech companies with $25 billion or more in annual revenue, aiming to unwind some of the highest profile mergers in the industry, like the combinations of Amazon and Whole Foods.