The Welcoming Project at 1,000 locations 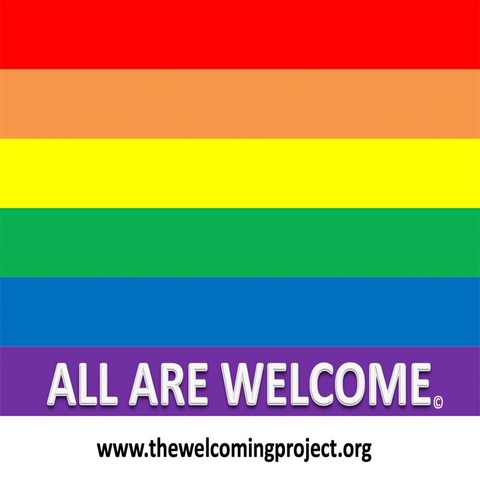 The Welcoming Project sign is now located at over 1,000 welcoming locations. TWP photo.

When Meredith Worthen started The Welcoming Project (TWP), she had no idea if anyone would be interested in what they were doing.

TWP was created to encourage local businesses, organizations, and churches to display welcoming signs on their websites and in their windows to make LGBTQ individuals and allies feel welcomed as patrons.

“I just felt the need to make a positive change for support of LGBTQ people in my community and beyond,” said Worthen. “I thought something like a rainbow ‘All Are Welcome’ sign in windows around town (here and elsewhere) could help do that.

“I have been very pleased with the far-reaching impacts of TWP and the requests for signs we have received from all over the world.”

Worthen moved from Austin, Texas to Norman, Oklahoma and said she experienced quite a culture shock. She wanted to do something to turn some of the LGBTQ negativity she was experiencing into positivity.

“I thought how I could help go about creating a community of ‘welcoming’ spaces and the phrase ‘All Are Welcome’ coupled with the rainbow sign just came together in my head,” said Worthen. “And because I saw this as a long term ‘project,’ The Welcoming Project was born.”

“When I saw our numbers were approaching 1,000, I was truly ecstatic!” she said. “From a simple idea years ago to a full-fledged 501c4 non-profit run fully by volunteers with full-time jobs and numerous additional commitments. It is truly amazing TWP has flourished.”

The founder said when she thinks about how 1,000 places around the world are displaying the “All Are Welcome” rainbow sign, it brings her much joy.

“I am just so happy to think that people share our goal: to make the world a more welcoming place for LGBTQ people,” she added “To think that people are so interested in supporting the LGBTQ community that they go online and reach out to us to get a sign to hang in their window is truly something special. It is very heart-warming to know that people care about supporting LGBTQ people and I am so glad to be a part of that.”

TWP has walked in both OKC Pride and Norman Pride several times. They also attend community events such as Groovefest and the OKC PeaceHouse Festival. Worthen said they have only received positive responses at these events.

“Our Scholarship Program helps get to word out about TWP to college campuses and students all over the world,” said Worthen. “We offer two scholarships every year, and we have received applications from as far away as Russia. By sharing the message of support for students who are dedicated to LGBTQ activism, we are sharing a message of inspiration toward more LGBTQ positivity. The Welcoming Project is honored to provide scholarship money to support these students and their endeavors.

TWP is run by a handful of volunteers, including Worthen, the founder and President, Tonya Maynard who is the Director of Philanthropy and a Ph.D. student at the University of Oklahoma, and Itzel Ramirez is our social media expert.

The Welcoming Project is a non-profit organization. “We count on donations from supporters to reach our fundraising goals and give back to the community,” said Worthen. “We greatly appreciate any and all donations in any amount.”

For information about the work of TWP, their scholarship program and winners, or to donate, visit www.thewelcomingproject.org.