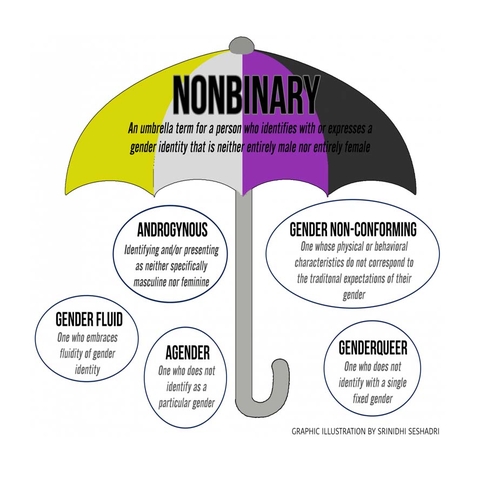 Today, July 14, is International Non Binary People’s Day, so I asked a couple of non binary people of color what their lives have been like, and I was surprised by what they told me.

The first person I spoke with is D’ Angelo, who is African American. They are a very talented Drag King performer and Mister USofA MI 2018. D’ Angelo came out in their sophomore year in high school with other LGBTQ+ youths and formed a Gay-Straight Alliance.

D’ Angelo once considered themselves bisexual and lesbian, but now a pansexual gender fluid person.

Most of the adversity and discrimination that D’ Angelo has faced came from the African American community. I’m not shocked by that since (we all know) “our people” can be the biggest bigots of them all when they should support a person’s individuality. There are so many strikes against us already.

Although they have experienced this discrimination, they feel secure in both the LGBTQ+ community and the black community. I am happy that D’ Angelo feels secure. That is all I hope for any black or brown queer individual. I can help you confused closed minded people about what it means to be non binary. Just know who you are and proceed with your life and let everyone proceed with theirs. There. Simple enough.

BTW, non binary is just another term for genderqueer or gender fluid. It simply means that one does not identify solely as female or solely as male. They don’t feel like they fit in either of those categories.

Although I am the Black LGBTQ+ Issues Columnist, I also touch on issues involving other people of color (POC) because the experiences are so similar.

Hannah is Iranian and identifies as non binary. They told me about what it is like to be a Middle Eastern American navigating this world as a non binary person, and their words surprised me.

They said, “Every Iranian will judge me harsher for my identity simply because it’s so stigmatized as unnatural. They accept trans, but not the in-between people.” Can you imagine that your culture accepts and understand LGBT but is not so accepting of the “Q” – the Queer, non binary, agender or anything other what they can understand. I was surprised because usually when people are bigoted, they are bigoted all the way. This feeling of being rejected because it does not meet a person’s idea of what the LGBT+ should mean must be maddening.

I also asked Hannah how they feel the American culture treats them as an Iranian non binary person. They replied, “Normally, Middle Eastern people are seen as intelligent, but because of their non binary status, they are seen as less intelligent.”

Hannah is a college student at the University of Oklahoma. I find them to be very intelligent. Sometimes people get stuck on appearances. I have never understood this. When I talk to someone, I do not think about who they are attracted to, what is between their legs, or if they present more feminine or masculine.

The only time I feel the need to ask is in certain instances because I want to get their pronouns correct. In fact, that is the correct way to address someone if you don’t know; you ask.