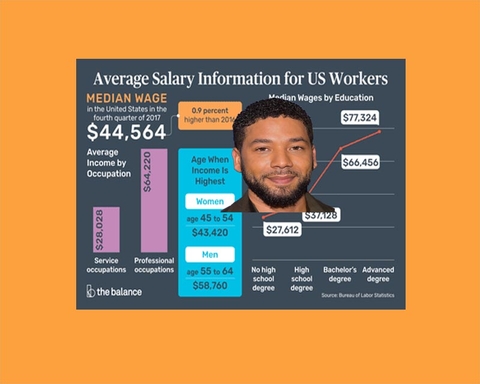 "Empire actor Jussie Smollett took advantage of the pain and anger of racism to promote his career." Chicago Police Chief Eddie Johnson said today in a press conference. "Why would anyone, especially an African American man, use the symbolism of a noose to make false accusations?"

This comment is the latest coming from the Chicago police investigation into the attack - or staged attack as we now know it - of Jussie Smollett.

For the back story, read: Jussie Smollett arrested and faces a felony charge for allegedly filing false police report.

In 2014, Smollett was cast as Jamal Lyon on the series Empire. He portrays a gay musician who struggles to gain his father's approval opposite Taraji P. Henson and Terrence Howard in the Fox drama. His role was hailed as "groundbreaking" for its positive depiction of a black gay man on television.

Smollett reprised his role in subsequent seasons and directed an episode of the fourth season in 2017.

He is also a singer-songwriter.

Purportedly, his current salary is $65,000 per episode. But according to reports, he staged the attack because he did not feel he was being paid enough for his role on Empire.

But let’s look at these numbers. According to the Bureau of Labor Statistics (BLS), below are the average salaries for most Americans (second quarter of 2017 report).

How does your salary compare to the above numbers? Because I know for most of us, it’s a struggle to make it on current salaries given the cost of living today.

But Smollett made more than any of the above salaries per episode. Let’s calculate $65,000 times 18 episodes per year. That’s $1,170,000 per year for 18 weeks of work. This amount does not account for other potential earnings for movies and music income he could make during the remainder of the year.

Yet that was not enough for this actor.

And look, I’m the first person to come to the defense of any disenfranchised person who has been treated unfairly, especially LGBTQ+ people. But for most of us who work full-time, we simply don't have the income necessary to make ends meet. Today’s dollar just does not stretch far enough for most people to meet the essentials such as food, rent, car payments, staples and sundries. Not to mention any entertainment expense, vacation, or saving to buy a home or saving for our future.

If it seems like a dollar today just doesn't buy what it should, that’s because it doesn’t. The BLS also makes available an inflation calculator to find out how much inflation has degraded the dollar during a certain period. For example, according to the most recent data collected by the BLS, current as of July 2018, what would have cost $20 in 1998 would now cost $31.

Another example is the price of a home. According to the same report, the average price of a new home in June 1998 was $175,900. According to the inflation calculator, that price today should be $271,950. However, the same report places the average home sale price for June 2018 at $368,500; more than 35 percent higher than the price when accounting for inflation alone.

I could go on with the numbers, but you get my point. The average American makes less in a year than Smollett made per episode, so it’s hard to feel sorry for the guy. Now, not only is he now a felon, but he may also do time for his misdeed.

And when the average working person struggles to make ends meet isn't it a little hard to feel empathy for someone who makes this kind of money?