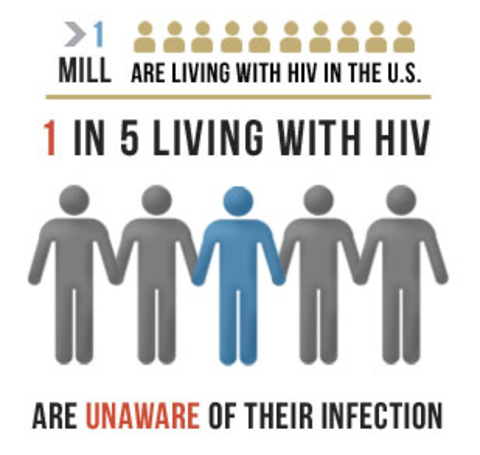 This statistic, and others, are available at www.Aids.gov. Photo from AIDS.gov.

(Washington, DC) Yesterday, on Black HIV/AIDS Awareness Day, I had the pleasure of meeting with leaders who are doing outstanding work to prevent new HIV infections and improve health outcomes for African-Americans. We shared stories and discussed the importance of engaging everyone in these efforts, including faith leaders, educators, athletes, entertainers, artists, scientists, healthcare providers as well as friends, families, and neighbors.

This approach also reflects the National HIV/AIDS Strategy, which calls for a collective response to the ongoing domestic epidemic, and sets specific goals with regard to addressing HIV-related disparities among African-Americans.

Our conversation was both sobering and inspiring. Sobering because of the challenges that remain in addressing the epidemic, including confronting the myths about HIV transmission and the virus itself. Inspiring because during our dialogue it became clear that these leaders are committed to breaking down barriers that impede our progress in preventing and treating HIV/AIDS.

Data highlight the urgency of this work. According to the Centers for Disease Control and Prevention, 1.1 million people in the United States are living with HIV/AIDS and nearly 50,000 people become infected with HIV each year. In 2010, African-Americans accounted for only 14% of the U.S. population, but 44% of new HIV infections. The majority (70%) of new HIV infections among African-Americans occur among black men, and are concentrated among gay men. In fact, young black gay and bisexual men who are the only group in the black community where new HIV infections are increasing. Black women represent 30% of new infections among African-Americans. Transgender black women are also at risk for HIV with as many as one in three in some studies diagnosed with HIV. And only 21% of black Americans have a suppressed viral load, the key health marker for HIV treatment.

Conclusive research shows that African-Americans do not engage in riskier HIV behaviors than other Americans. So why are HIV rates so high in our communities? One main reason is the lack of access to healthcare. As many as 22% of African-Americans with HIV do not know that they have the virus. Of new infections among youth, 60% are among black youth, and over half of all HIV positive youth were unaware of their infection.

Despite the sobering statistics, the group was optimistic about meeting the goals of the National HIV/AIDS Strategy. Significant advances have been made in HIV prevention and treatment – getting tested is easier than ever before, and medications have extended the lives of tens of thousands of people living with HIV. In addition, the Affordable Care Act is dramatically expanding coverage of HIV prevention services and medical care for African-Americans – in 2014, seven million uninsured African-Americans, including thousands living with HIV, will have access to healthcare coverage. Already, the Affordable Care Act has extended coverage to thousands of young adults, and has increased access to HIV testing for millions of women without cost sharing. And because of the law, insurers can also no longer turn someone away just because he or she is lesbian, gay, bisexual, or transgender.

We also discussed the ongoing importance of continuing the Ryan White Program, which provides vital care and treatment for people living with HIV who would not otherwise have access to comprehensive care.

Participants also pointed out that we must address more upstream issues, including increasing education and economic opportunity for all Americans, to turn the tide permanently against HIV.

They stressed the importance of addressing homophobia, empowerment of women and girls, and HIV-related discrimination in the broader context of our everyday lives.

We still have much work to do. Too many people have been affected and we must continue to drive our efforts forward to build healthier communities and reduce HIV-related disparities. As the day’s theme, “I Am My Brother/Sister’s Keeper,” attests, it will take the nation’s collective efforts, including on-the-ground grassroots advocacy, to reach an AIDS-free generation for all Americans. After our inspiring discussion yesterday, I am more hopeful than ever that we can reach that goal.

To read the Twitter chat Russell Simmons and I had yesterday on HIV/AIDS, please visit here: