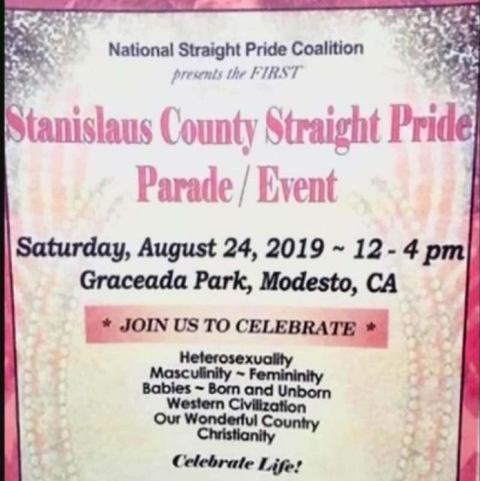 Modesto's "Straight Pride Parade" is scheduled for August 24. Photo from the flyer.

The LGBTQ+ community in Modesto, California, is preparing for what they view as an attack on their identity. Another "Straight Pride Parade" is in the works, and this time it will be held in their city. The event is planned for August 24.

"If they were just there and they want to celebrate the fact that they’re straight, and they don’t have any type of hate going on with this protest, I would be all for them doing it,” said Joey Aguilar, an openly gay man who lives in Modesto. “This is not what it is.”

He said the “Straight Pride Parade Coalition,” the group behind the parade, is threatening.

Many of the local LGBTQ+ community expects the event to draw white supremacist crowds who view Aguilar and his community, as less than human, and evil.

According to the event organizer, Aguilar may not be far off.

When asked if homosexuality was that of “a death culture,” organizer and Straight Pride Parade founder Don Grundmann said, “Yes. Because no culture has ever been built on homosexuality.”

Grundmann said they are not a hate group. They “support life,” but they do say homosexuals are immoral.

According to their website, the group promotes the “superiority” of the following principals: Western Civilization, Whiteness, Christianity, and Nationalism, among others.

“The model of our organization is ‘normal, natural, healthy and sane,’” Grundmann said. “Which our opponents are the opposite of all of those.”

Modesto city spokesperson, Thomas Reeves said as a whole, city officials don’t approve of the Straight Pride Parade’s messaging, but by the First Amendment, they must approve of their right to rally.

“Approving an event is not an indication of sponsorship or an endorsement by any means,” Reeves said.

Community leaders are hoping to clash hate with love, hoping a set of ideas doesn’t become a clash of violence.

The city could have a decision in terms of approving a final permit by the end of the week. One city official said privately they are looking to find a way to be able to pull the permit from the organization. The city is "not happy about hosting them."